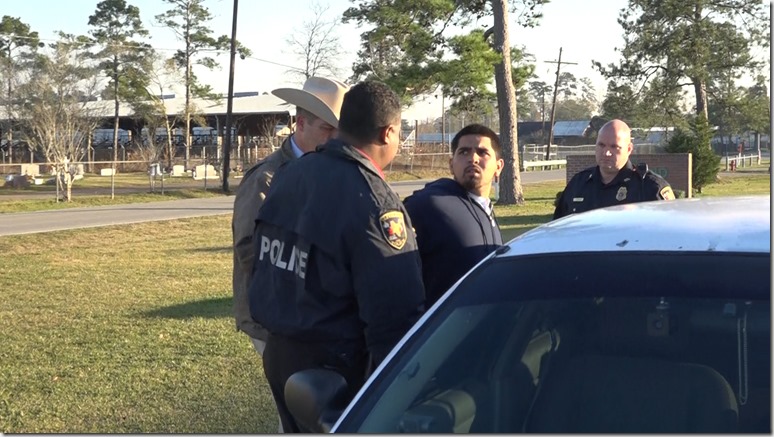 Moments ago, Cleveland Police and Texas Rangers arrested three suspects in connection with the Wednesday night robbery and murder of a store clerk at the Exxon on FM 2025. Two of those arrested are adults. One is a juvenile.

Additional details and on-scene video will be posted soon…

On Wednesday, December 16, 2015 at 9:25 p.m. the Cleveland Police Department was alerted that a shooting had occurred in the Exxon convenience store located at 1030 FM 2025.

Cleveland Police Officers arrived on scene to discover two store clerks on the floor behind the front counter. One of the clerks was bleeding from the chest due to a gunshot wound as the other clerk attempted to assist their co-worker.

Officers secured the scene as first aid was administered to the shooting victim. The victim was later treated by EMS and transported to a Houston area hospital via air ambulance. While being treated at the hospital, the victim succumbed to the gunshot wound.

The Cleveland Police Department’s preliminary investigation finds three light skinned male actors (White or Hispanic) entered the business shortly before 9:25pm. The actors wore bandana’s covering their faces. Upon entering the store one of the actors pointed a dark in color semi-auto pistol at one of the store clerks who was standing next to the cash register. A verbal exchange took place and the actor shot the clerk in the chest.