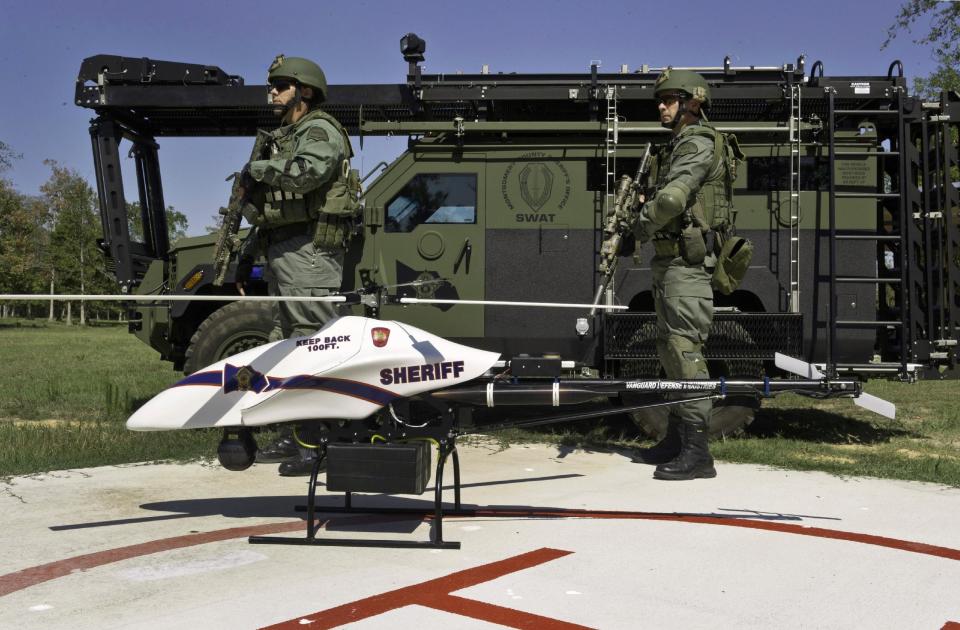 The drone, which was purchased by Montgomery County in 2011, was almost entirely funded by Homeland Security Grants specifically designated for the purchase of drones.

Weighing in at 29 pounds, the drone has been used very little since its purchase, due to recent FAA regulations that limited the weight of unmanned drones to 25 pounds.

Congressman Brady, who was present when the drone was first unveiled in 2011, commended Sheriff Gage for his “aggressive enforcement of public safety in Montgomery County,” and said the Shadow Hawk was further evidence of that. The Congressman further pointed out that Montgomery County is one of the 25 fastest growing in the United States and is mostly unincorporated, challenging Sheriff Gage with the policing of a large area.

While at the unveiling, Brady saw a demonstration of the Shadow Hawk by Vanguard months ago and was impressed with its flexibility and cost effectiveness. According to Brady, the device costs about $40 per hour to operate, versus $500 per hour for a manned helicopter.

The drone was mainly purchased to assist SWAT Teams in their operations. On site, Swat members will often find themselves in situations where obstacles and structures blind them to the dangers ahead. A drone can assist them in mapping out danger zones in a building’s layout, such as doors, windows, and any other possible obstructions or hiding places.  Although the drone’s jet engine is not quite as stealthy as one might assume (some liken it to a flying lawnmower), the drone’s video feed can still be an invaluable tool, giving the operator heat sensing equipment which would also prove useful in any search and rescue operations.

Some organizations such as Equusearch have used drones since 2006 for search and rescue operations. In May of searchers spent days looking for the little red haired child that vanished in Liberty County. One of the drones flew over a small pond and detected what looked like a blotch of red in close to the side of the green moss covered pond. Texas Rangers immediately ordered DPS helicopters to fly the pond to see if they came up with the same result. Having to fly much higher than the drone made it difficult, but eventually a Texas Ranger noticed the rotor wash was clearing the scum and ordered the helicopter to use a sweep motion to clear it. That was when they found little Devon. That find was one of more than a dozen finds with the drones since 2005.

In February the Federal Aviation Administration ordered EquuSearch to cease the use of their drones.

Last Monday Texas EquuSearch filed a lawsuit in a Washington, D.C., appeals court says there is no basis in law to prohibit the operation of model aircraft for humanitarian search and rescue activities.

The lawsuit says that Texas EquuSearch’s use of drones falls outside FAA restrictions that say model aircraft may not be operated “by persons or companies for business purposes.”

“This lawsuit seeks to confirm the right of organizations like Texas EquuSearch to use civilian drone technology for the benefit of our nation,” Brendan Schulman, an attorney for the group, said in a statement. “It is also incomprehensible, as a matter of policy and common sense, that the FAA would deem ‘illegal’ the use of a technology that can reunite missing people with their families, after decades of allowing the same technology to be used in the same way for recreational purposes.”

In the Colorado mountains, drones are often used in searches for lost hikers in the.

Drones are used in Houston for business also. Don Hirsch, owner of JAM Aviation uses drones to shoot commercials for automobile dealerships by using aerial drone photography. In addition real estate agents use JAM to show aerial photographs of properties they have listed.

Privacy concerns, mainly about people using drones to peer over neighbors’ fences, led the Texas Legislature to pass a law last year regulating the use of drones. Texas became one of a number of states adopting legislation restricting or outlawing the use of unmanned aircraft.

In the last session of the Texas Legislature House Bill 912 was passed dealing with drones in Texas and how they could be used.

Most notably, new Gov’t Code §423.003 makes the use of unmanned aircraft to “capture an image of an individual or privately owned real property in this state with the intent to conduct surveillance” a Class C misdemeanor. Likewise, the possession, disclosure, display, distribution, or other use of an image captured in violation of the law is also against the law. Gov’t Code §423.004. Mere possession of an image is a Class C misdemeanor, while the disclosure, display, distribution or other use of the image increases the crime to a Class B misdemeanor. Id.

On the civil side, Gov’t Code §423.006 creates causes of action for owners or tenants of privately owned real property in Texas. Suits can now be brought to:
(1) enjoin a violation or imminent violation;

(3) recover actual damages if you are the individual captured in the unlawful image and if the image is disclosed, displayed or distributed with malice.

This is the law many need to watch as there are many such type aerial devices now on the market for the private citizen. Anyone purchasing these should take time to read the law before venturing to the air for photographs and aerial video. ‘ 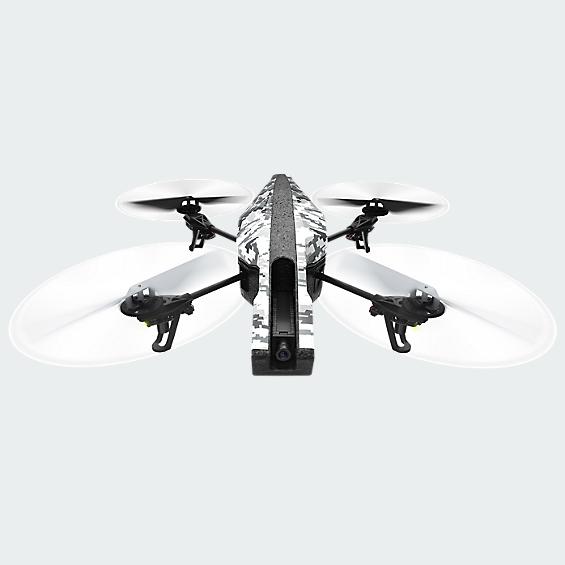 VERIZON WIRELESS SELLS THE PARROT AR. YOU ARE ABLE TO SHOOT PHOTOS AND VIDEO AND STREAM THEM BACK TO YOUR MOBILE DEVICE WHICH IS USED TO FLY IT.

The FlameWheel 450 is a four head (Quad) multi-rotor aircraft designed for fun or aerial photography.

Using the high tech NAZA M Lite autopilot stabilization system and GPS, the FlameWheel 450 can perform altitude holds, position hold, return to home failsafe and auto leveling hovering, cruising, even rolls and other helicopter flight maneuvers. It can be set up for entertainment, aerial photography, FPV and other aeromodelling activities. It is only limited by your imagination.