Police say speed and alcohol were factors in a crash that critically injured the driver and killed her infant daughter.

Around 6 p.m. Monday, a white Chevrolet Tahoe was southbound on FM 1484 near Miller when the driver, 28-year-old Ashli Heil of Conroe, reached a curve and lost control of the vehicle. The SUV crossed into the northbound lane, almost striking another vehicle before hitting a cedar tree with the impact to the passenger door. The vehicle also sheared off a gas meter.

North Montgomery and Cut and Shoot Firefighters arrived and had to shut off the gas line before approaching the still running crashed vehicle, where Heil was injured and trapped along with her 8-month-old baby girl, Whilow, who was already deceased. The infant was strapped in her car seat, which was secured in the right rear passenger seat but was no protection from the tree that came inside the vehicle upon impact.

Heil  was extricated and transported by PHI Air Ambulance to Memorial Hermann Hospital in Houston where she was listed as stable as of 10 p.m.

Becky Paschal was in the oncoming lane and noticed the Suburban, she said. The SUV didn’t navigate the curve, going straight across her lane and into the ditch before striking the tree.

Paschal said Heil’s Suburban would have hit her, had she not slowed her speed.

“In my profession, I drive so I was already watching way ahead of me, and I noticed it out of control ahead of time, and I slowed down – thank God,” she said.

Pascahl said the wheels were turned but the truck was going straight.

The vehicle had what appeared to be new Michelin tires.

The Texas Department of Public Safety and Montgomery County District Attorney’s Office are investigating the crash. A DPS Trooper at the hospital with Heil reported alcohol was involved and DPS on the scene said excessive speed was a factor.

FM 1484 will be closed between SH 105 and Milmac remains closed as of 10 p.m. while the investigation continues and the gas company installs a new meter. 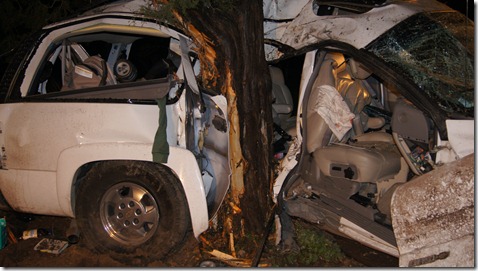