Home
Liberty County
On Wednesday, January 19, 2022, around 7:10 pm CPD officer Rodiguez
was dispatched to a disabled car on top of the San Jacinto River Bridge. The roadway was wet, and it was raining.
After making contact with the driver of the disabled car officer Rodiguez returned to her patrol unit with all of her emergency lights on awaiting assistance for the disabled car.  A family member arrived and started to fill the car with fuel.  Suddenly an eighteen-wheeler pulling a flat-bed trailer loaded going south on U. S. Hwy. 59 struck the patrol unit sideswiping it with officer Rodiguez
sitting inside.  The eighteen-wheeler never stopped after crashing into the patrol unit.  Thankfully officer Rodiguez was not injured; nor was the female who was standing beside the passenger side of the patrol unit.
“When I received the call my heart immediately started to race and my mind flashed back to my first FTO-Field Training Officer Jesse “Earl” McFarland who the bridge is named after.”. “Earl” was escorting a group of military veterans who were walking to Houston.  “Earl gave the ultimate sacrifice and loss his life after being hit from behind by an eighteen-wheeler on the same bridge”.
There should be damages to the right front fender and bumper of the eighteen-wheeler and damages to the flatbed trailer as well.
We want to thank the Texas DPS, Cleveland Fire Department, Allegiances EMS, and local tow-truck operators for their quick response.
The Cleveland Police Department is asking anyone who may have information about the fleeing eighteen-wheeler, or the driver to please call the Cleveland Police Department at ph. #(281) 592-2622, or call CrimeStoppers at ph.#(936) 539-7867 all tips remain anonymous. 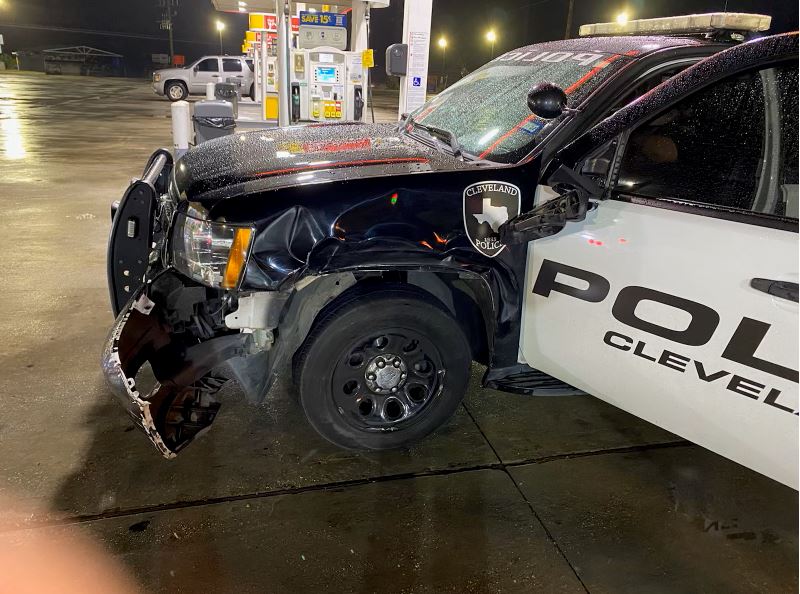