With their dog used for hog hunting they entered the woods. Within a short time they became lost and dark had set in. Using a cell phone they called home and a short time later several friends and family members were assembled and started a search using 4-wheelers.

The girl talked to her grandmother close to 9 p.m. when her cellphone was the last to die.

Just after 3 a.m. a DPS helicopter from Houston was dispatched to the scene and began an aerial search with sensors which detect body heat. Within 45 minutes they located the three deep in the woods.

Searchers then entered to woods heading to the GPS location DPS had given them. Almost an hour later in very heavy brush they were found along with their dog. Rescuers giving the three their jackets they slowly brought them out of the woods at the dead end of May Road.

Cleveland EMS who had been on the scene transported the three to Cleveland Hospital as a precaution. They were released a short time later.

Rescuers warn people that before they enter the woods have a cell phone with an extra battery, flashlight and warm clothing. In addition if you become lost and are able to contact 911 remain in the spot you called from don’t attempt to move around. 911 operators will be able to give rescuers your exact location and if you move and for some reason a cell call is not possible again the time for the additional search could cause more harm.

Also if you are notified by a friend or family member of someone los in the woods contact authorities immediately. Do not attempt to take the search into your own hands. 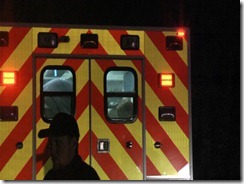 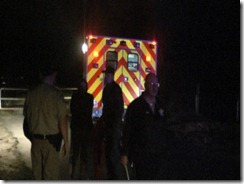 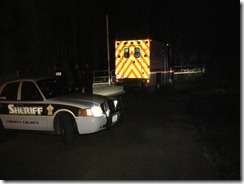 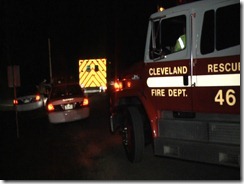