STORIIES, VIDEO AND PHOTOS BY SCOTT ENGLE AND JAMIE NASH

Firetower Rd. and FM 1485 was once again the scene of a double fatal accident last Saturday evening. According to DPS, a 1997 Dodge 3500 truck driven by Octavio Palacios, 46, of Willis was northbound on FM 1485 with his son Gustavo Palacios, 17. A rain shower passed through the area a short time earlier, making the road extremely slick as they approached the curve at Firetower Rd.

At the same time Edy Pereira, 43 of Conroe was southbound approaching the curve. Palacios slid across the centerline striking Pereira head-on. The force of the crash ripped the cab off the Dodge truck. Palacios was thrown from his vehicle and his son was able to crawl out on his own.

Pereira was trapped in the driver’s seat and was later pronounced dead by Justice of the Peace James Metts.

Pereira’s front seat passenger, Maria Castilleja, 61, of Conroe was cut from the vehicle and flown to Hermann Hospital in Houston where she passed away at 6:30 p.m.

Martha Blanco, 41, who was from Brownsville and recently relocated to Porter, was transported by ground ambulance to the hospital as was the younger Palacios. Octavio Palacios was stabilized on the scene with severe head trauma and also flown to Hermann Hospital in Houston.

The Saturday crash marked the sixth fatal accident at that location since April 18, 2010 and many more serious and not-so serious accidents, all within the curve. In June of 2010 TXDOT removed the 55 MPH speed limit sign that was in the curve and erected a 45 MPH precautionary sign before the curve. The curve is well marked northbound with reflective arrows through the entire curve. There too, several have been run over and replaced, one still lies under the grass against the fence. Southbound is a different story. the sign that showed the curve and precautionary speed has vanished. If you don’t know the road you will find the curve quickly.

On April 7, 2010 heavy rains hit East Montgomery County. Just after 5 p.m. a Dodge truck was heading north on FM 1485 when the pickup spun out of control and flipped trapping the male driver under the vehicle. New Caney and Caney Creek Fire Departments spent almost an hour freeing him. He was transported to the hospital in stable condition.

On April 18, 2010 a Chevrolet Trailblazer was northbound on Firetower Road in the same curve. The driver, 36-year-old Michelle Ballinger of New Caney, lost control. As Ballinger’s vehicle began to spin she was struck by a Ford Explorer driven by Lisa Andrews, 36, of Porter. A Ford Mustang driven by Rebecca Williamson, 21, of Conroe was behind the Explorer. She slammed into the rear of Ballinger’s Trailblazer. Ballinger was transported to Hermann Woodlands by ground ambulance in stable condition.  Lisa Andrews and Rebecca Williamson were taken to Kingwood Hospital in . Lisa Andrews was then transferred to Hermann Hospital in Houston where she passes away the next day.

On Saturday, June 23, 2010 Donna Golden was northbound on FM 1485 in the curve. She was going to see her husband in the Woodlands. Golden’s vehicle slipped off the edge of the road and she over corrected. This caused her vehicle to slam into a Honda Civic driven by Stacie Buckle of Conroe. Buckle’s 13-year-old son was in the front seat. He and Golden were taken by MCHD to Kingwood Hospital in stable condition. Stacie Buckle, who was trapped in the vehicle, was flown to Hermann Hospital in Houston in serious condition with multiple fractures.

Three days later, on June 26 just after midnight a Ford SUV driven by Virginia Johnson, 41, of New Caney was traveling southbound in the curve. A KIA SUV driven by Christina Hamdani, 31, of Conroe was northbound when she crossed the centerline slamming head-on into Johnson. Johnson’s vehicle burst into flames . She was pronounced dead at the scene. PHI Air Medical was dispatched to transport Hamdani to Hermann in Houston. Crews were finally able to cut Hamdani free from her vehicle, at which time she went into traumatic-arrest. She was then transported by ground ambulance to Kingwood Hospital where she too was pronounced dead. Once again, the road was wet.

After several hours of the road being closed for the investigation Julie Stepp, 27, of Conroe approached the scene of the crash northbound and seeing Officer Rodriguez directing traffic she did not see his patrol car and slammed into it.

Several days later, on July 1, 2010 at 7:55a.m., a Dodge Durango driven by 54-year-old Debra Earley of Crosby was northbound in the curve when she spun out flipping her van multiple times. The vehicle came to rest against the fence of the gas plant at that location. Earley and her three grand children ages 2 to 10 were transported to Kingwood Hospital in stable condition.

On September 6, 2010 just after 10 a.m. the rains began to fall. That is when a 2007 van driven by Jose Troches hydroplaned in the curve as he was northbound on FM 1485. He spun into the path of Marcus Berrios who was southbound in his pickup. Berrios, who was unable to avoid the collision hit the back of the van trapping him in his vehicle.  He was extricated and transported to the hospital in stable condition. Troches was not injured.

Many people have slowed down in the curve but still spun out on the wet road. When you look at approximately 20 percent of all fatals in the entire Montgomery County are in this one location bells and whistles should go off at TXDOT headquarters.

One thing in common has been wet roads, something that has been missing this year until last weekend.

There have been many more not so serious accidents at this location also that were no shown here.

TXDOT PIO in Houston did not return calls for comments. 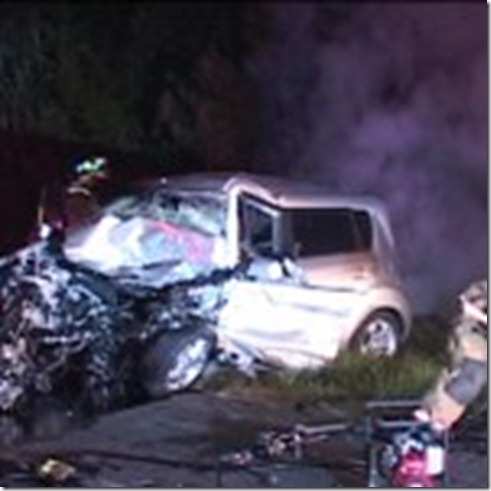 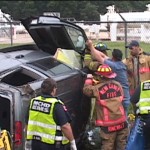 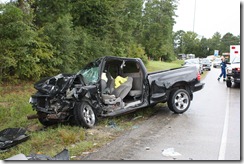 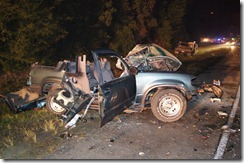