While at the Fire Academy during the hot summer of 1980, I asked now-retired District Chief Earl Bobo what side of town was the most challenging to Houston Fire Fighters. He gave a synopsis of the city but when it came to the east side, he said ” they don’t do as much as other areas, but when they do, it’s usually a headliner” and he recalled major fires such as Englewood yards, Charter Oil, and the numerous the Ship Channel area fires. Well, after June 24, 1995, you can add the Houston Distribution on Market Street to the list. Located just down the road from Station 41, seven alarms plus taps were needed to battle this inferno from a building that stored poisons, plastics, and flammable liquids. This was the last fire a Houston Fire Department apparatus was destroyed as Ladder 19 became a victim when hundreds of gallons of burning liquid flowed down a dock and surrounded it. The fire was not knocked down for nearly 18 hours.

Engine 8 ( Captain Gilbert Bennett, E/O Bob Parry, FF Mark “Dirt” Evans, and a fill-in since a FF called in sick. We were on the way to Kroger at Polk and Cullen to shop for the day when Fire Alarm dispatched Box 6541 at 08:33 for Stations 41,27,45,42 and 20 for a warehouse fire. We heard 41’s report smoke visible and on the way back from the store, the second alarm was sounded. Manpower for the day as low as typical with at least 35 firefighters down from minimum staffing, which meant nearly every ladder was running with 3 along with maybe a couple of engines. Our chief made it on the 3rd alarm just as he was enjoying his breakfast from Chef Evans and while cleaning up, the fourth alarm was sounded and Engine 8 responded. While eastbound on Interstate 10, the smoke which looked like a dark shadow suddenly became a “tornado” with the smoke column heading straight up. While staged outside at the entrance, we were ordered to lay a line from a “Budweiser” hydrant and prepare to pump in Ladder 44 which was located in the middle dock area of the complex. It took a minute or so for an adapter to be found for the private hydrant it was painted red I believe) and we began to the layout. The parking lot looked like spaghetti but silently thanked that we had a 4-inch hose and not all 2 ½ liked they did prior to the early ’80s. The fire was making great headway in the U-shaped complex. Numerous hand lines, deck guns, and ladder pipes were operating but the fire was still spreading. Assistant Chief Swisher walked by me and told me to put on an air pack just in case things get worse. It was long after that when the front wall by the driveway suddenly collapsed and fire rolled out. Engine 40 was parked there but was moved about 10 minutes earlier. The entire complex was now being evacuated. Many 4” hose lines were being cut by axes as I did because there was no time to wait to shut down hydrants. It was the first and last time I had cut a supply line in my career. It is a testament to the Fire Fighters and Officers that no one was injured during the retreat and no apparatus was damaged except for L-19. If this fire would have been at night, the storyline would have probably more tragic. After parking Engine 8 and witnessing the largest fire of my career, I remembered to take some pictures before and after the hasty retreat. One of them depicted Engine 45 leaving the complex surrounded by smoke and flame. I sent it to the IAFF Media Contest later where it won an “Honorable Mention” under the title “Last Company Out”!! 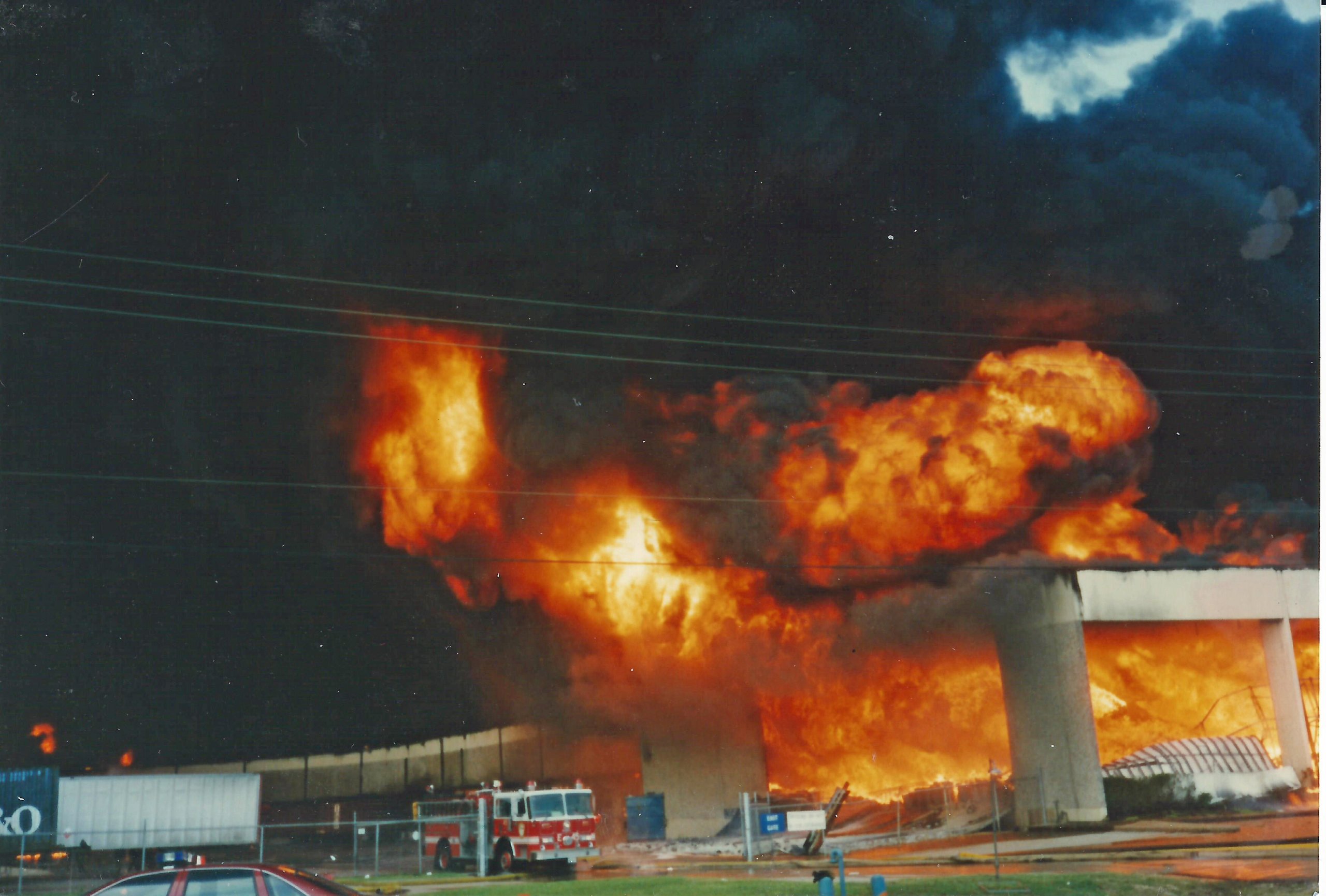 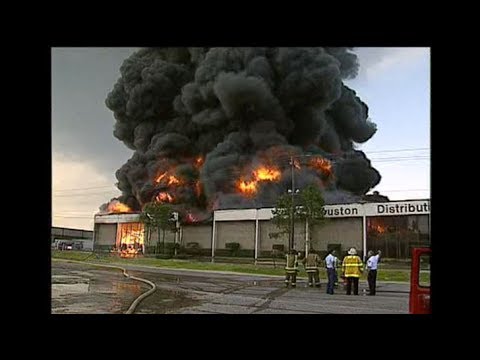 After all, companies were out, I wheeled around “The War Wagon” to a hydrant caught by one of the first arriving companies. Since most, if not all the hose and equipment inside the complex was left behind, I shut the hydrant down, hooked it up, and began to flow water through our 2-inch tip. Another crew dragged an unused line from a nearby hydrant and we had all the water we needed. It wasn’t long afterward when District 6 Chief Broussard told me and all others to leave the immediate area due to a possible explosion from information received from building owners of the exposed buildings if they should ignite. We (dozens of firefighters) walked down about 2 blocks toward 41’s to sit it out. It had to be around 2 pm. And suddenly we felt the heat of the day. Not by the fire- but the sun which was blocked for hours by the tremendous cloud of smoke. The order later came out to let it burn until we could get better equipment from CIMA to put it out while we were munching on cold pizzas at 41’s. It wasn’t until late that night and early morning when CIMA came out with a big deluge gun fed by 5’ hose lines that the fire was finally extinguished. We were told by our sector chief to report to the Fire Academy to change out our gear for “reserve gear” they had stored there. After filling up with fuel, we left the FTA at 5:30 am. and pulled back in at Crawford and Polk at 6 a.m. It was a long day and night and we were ready to go home.

Overall, 31 engines out of 81 engines were at the scene, along with 14 out of 33 ladders, 3 boosters, nine District Chiefs, both Haz-Mat units, 2 Cascades, Rehab, one Rescue, and numerous BLS and Medic units. A second alarm assignment was held there for the entire next day. In most cities, off-duty crews would have been brought in to man reserve equipment at the scene but not here. I found out later that sprinklers were operating when the first alarm companies arrived but the spreading fire overwhelmed the system. Maybe larger lines and bigger sprinkler heads should be in place for warehouses that store explosive and hazardous materials. The residents of the Pleasantville neighborhood ( who were evacuated)were shocked, as well as many city officials, of the short distance between a residential neighborhood and a complex full of explosives.

All I can say is after 18 hours of hell, we were all blessed by God’s Hands that we all lived to tell this story in our own way.

Yep, that building on the east side was filled with organic peroxides. Bob, that was a memorable day for sure. And I am sure you also remember that HFD mounted a fire watch on the site for over a month–24/7–in case the shelled-over synthetic rubber reignited (it had exothermic properties, meaning it continued to emit heat internally after its exterior solidified). So HFD sat there and watched for 30 days, then decided it was OK to leave. They hadn’t been gone 2 days when, you guessed it, the stuff reignited and caught the other half of the warehouse on fire (the half that had been so valiantly protected by HFD during the first firefight).

So, on whatever day it was in July, I am on break from Fire Alarm office where I worked at the time. I had gone home to take a nap and was awoken by a page for a 2-11 at 8500 Market. What? That can’t be. We just had a huge fire there a month ago. So, I got in the car and headed in that direction and the first time I looked up it looked like an F5 tornado running across an otherwise cloudless sky in east Houston. Pulled up on Gellhorn and it was rippin and gettin. They were laying hose and ladder pipes were going up. Anyway, I took a few shots there and had to go back to dispatch. When I get back to dispatch, about an hour or so into the fire, I look at the big status map we had on the front wall. About 25 engines forming a cone representing the entire east side of Houston are showing red, meaning out of service. Well, that’s true because the second Market fire went to a 4-11 and umpteen taps, but at least some of those red dots should have been green reflecting fill-in companies. The dispatch chief and I were pretty good friends, so I asked him why there was no one backing in for any of the engines at the fire. He sat back in a big, comfy office chair eating popcorn, and said, “Yeh, we were just thinking about that (he and the senior). We figured Jacinto City could handle anything we got out there for now.” I nearly passed out.