To Parents from Precinct 4 Justice of the Peace James Metts 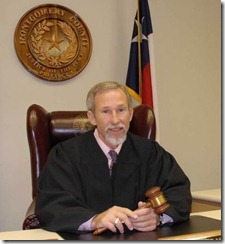 In an economy when very few families can afford a stay-at-home parent, many have no choice but to leave juveniles unsupervised for long periods of time on a daily basis during summer break. Unfortunately, statistics show lack of supervision increases all sorts of dangers, and some can be life altering or worse.

Among the greatest dangers are the ever increasing problems of drug and alcohol abuse. Any parent who utters the words, “My kid would never…,” is asking for trouble.  Even the best of kids get curious; can be talked into things; and sometimes simply use poor judgment.

During my tenure as Precinct 4 Justice of the Peace, I have conducted far too many inquests into the deaths of young people where drugs and/or alcohol played a role. It is always difficult for the parents and other loved ones to understand or accept when a life ends before it has really begun.

I have also watched young lives go into a downward spiral because of drugs and/or alcohol, and futures thrown away despite the best efforts of parents, school officials, law enforcement and myself. I believe educating parents and asking them to take off the blinders and consider the possibilities is a step in the right direction, so I have compiled some information to that end.

According to the 22nd annual Partnership Attitude Tracking Study (PATS) 2011, sponsored by MetLife Foundation, there was a significant increase in the number of teens who admitted using drugs and alcohol in the three previous years.

One in five teens admitted taking a prescription pain reliever not prescribed to them by a doctor, and one in four surveyed admitted having taken a prescription drug not prescribed to them at least once. Another statistic headed the wrong direction was the number of teens who strongly agreed that “sniffing or huffing things to get high” can be deadly. Of those surveyed, only 60 percent believed the practice could be fatal, which was 10 percent fewer than in 2008.

Some parents believe their children never have access to drugs, which has probably contributed to the fastest growing trend among those 12 and older – abuse of prescription pain relievers. A study by the Substance Abuse and Mental Health Services Administration revealed 70 percent of those 12 and up obtained their prescription drugs from a friend or relative, sometimes without their knowledge.

To “get high” or “experiment” with drugs, many teens need look no further than the bathroom medicine cabinet. Some commonly abused leftover prescription drugs are narcotic painkillers, muscle relaxers, cough syrup with codeine, anti-anxiety medication and drugs to treat ADHD. A variety of over-the-counter medications are also popular. Most are cough and cold remedies, particularly those containing dextromethorphan or pseudoephedrine. Multiple surveys have shown kids think because a drug is prescribed by a doctor or purchased over the counter it is safe for experimentation and not potentially deadly, like street drugs. That misconception has proved fatal thousands of times, and caused permanent damage in even more cases. For these reasons and many others, parents should dispose of unneeded medication or make sure it is locked away where their children and their children’s friends cannot reach it.

Even then, danger probably still lurks inside the home, just keystrokes away. Social networking and internet search engines allow young people not only to research and share information, but also to order medication from unscrupulous websites, opening up a whole new way to obtain drugs for the purpose of abuse without ever leaving the house. They can also find tips on what substances can be inhaled, or “huffed,” and detailed recipes and instructions for cooking methamphetamine. Parents underestimate how tech savvy their kids are, and that can also be a fatal mistake. Restrictions should be placed on internet use and the history should be checked regularly. Parents should be able to access social networking sites and know who is communicating with their child. They might be upset that their privacy is invaded, but seeing them pout is much easier than seeing them die.

Regularly monitoring what a teen is doing online can expose or prevent other dangerous and potentially deadly activities they tend to discuss or plan online as well, such as alcohol abuse.

The PATS report found 62 percent of teens surveyed admitted consuming their first full alcoholic beverage by age 15, and nearly half of those surveyed (45 percent) said they do not see a “great risk” in heavy daily drinking. What’s more, nearly three in four surveyed (73 percent) reported having friends who drink alcohol a minimum of once a week. Research conducted by the National Institute on Alcohol Abuse and Alcoholism, and others, showed those who began drinking before age 15 were four times more likely to become alcoholics than those who began drinking at 21.

But not everyone who begins drinking at an early age lives long enough to look back. According to the National Council on Alcoholism and Drug Abuse, every year, 5,000 young people die as a result of underage drinking. This includes about 1,900 deaths from motor vehicle crashes, 1,600 as a result of homicides, 300 from suicide, as well as hundreds from other injuries such as falls, burns, and drowning.

Some adults consider underage drinking a rite of passage and not only tolerate it, they facilitate it. Parents and those 21 and over need to know the dangers of underage drinking, and if that is not enough to stop them from providing alcohol to minors, they should know it is a crime and they will be held accountable. Unless the adult is the parent of the minor they allow to drink alcohol, the adult is breaking the law along with the minor.

Alcohol, whether it is beer or hard liquor, should be locked away in homes with minors, especially when they will be unsupervised. Parents should watch for signs of alcohol abuse and take action when they appear.

There is no way to guarantee a child will never abuse drugs or alcohol, but if you love your child, you will do everything you can to ensure they don’t become a statistic.