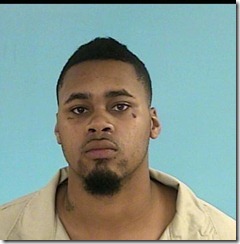 At 10:45 p.m. Sunday night, a man walked up to the teller window at the Woodforest Bank in the Wal-Mart store on Loop 336 and I-45 in Conroe. The suspect, identified by Conroe Police as 23-year-old Orlando Carnell Williams, told the teller to give him the money. No weapon or note was displayed. However, the teller complied, not knowing whether or not Williams was armed.  Instead of fleeing the premises, Williams then started walking around inside the store.

Conroe Police responded to a hold-up alarm and the bandit was pointed out to them. Williams refused to comply with officers, resisting as they attempted to handcuff him.

He was arrested and transported to the Montgomery County Jail on robbery charges. As of this writing, Williams is held without bond.

Williams, who resides at 2020 Plantation in Conroe, was arrested on December 5, 2009 in Huntsville where he plead guilty to possession of a controlled substance.

4 thoughts on “Bank Robber Makes It Easy For Cops”