Max Loerch, a Magnolia Firefighter suffered a massive heart attack September 5th at his home in Magnolia. His wife started CPR as fIre and EMS units responded along with deputy Phillipe Sibelle of the Montgomery County Sheriff’s Office.After 52 minutes of CPR and being shocked nine times medics Ray Arredondo, Nathan Leger and Kevin Nutt then started an IV that is one degree above freezing enroute to the hospital. This lowers the body temperature and has been very successful in helping prevent neurological damage. Arriving at the hospital he was immediately taken to the cardiac cath lab to put stint in. It was discovered he had 80% blockage and 100% blockage.  At that point he began having seizures and was put in a drug induced coma which lasted 13 days.

He did suffer some neurological issues and was sent to Nexus Specialty Hospital for nine days of rehab.

Medical bills are currently over $500,000 and climbing and medications are over $400 a month.

This Saturday, November 6, the Magnolia Fire Department, his second family who has been very supportive during this time will be having a barbeque benefit Max. The money raised will be used to assist Max with the mounting medical bills.

The barbeque will be from 10:00am until 6:00pm in the Target parking lot which is in the Westwood Village Shopping Center near the intersection of FM 2978 and FM 1488. 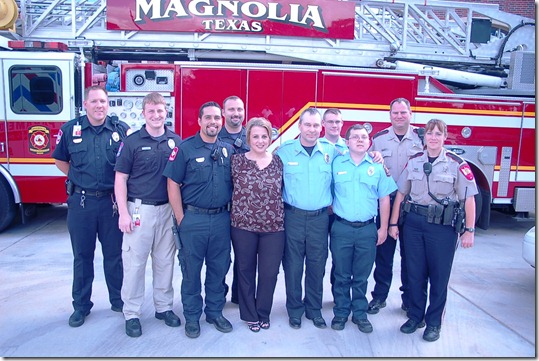