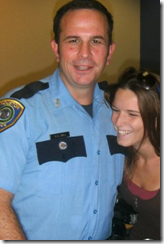 Just after 2am this morning all that ended when an Volkswagen driven by a yet unidentified driver crashed through an accident investigation scene at Yale and the North Loop in Houston. That vehicle struck Will who was interviewing a witness at the time was killed instantly. The officer pushed the witness out of the way just before he was struck.

Just after 2 p.m. Johoan Rodriguez, 26, has been released from Ben Taub Hospital from the minor injuries he received this morning after striking and killing Officer Will. Charges have been filed in the 183 rd District Court in Harris County. He is charged with Intoxicated Manslaughter. Possession and Evading arrest in a vehicle. The last charge came as he broke through the roadblock and as officers pursued him her struck Will.