At 1:00 a.m. this morning a DPS Trooper was heading south on highway 75 in Willis when a green 2006 Honda Civic passed him going northbound. The trooper noticed the two occupants were suspicious as they avoided looking his way. As the trooper turned around on them he noticed the license plate light was out. Within seconds the Honda sped up and ran the red light at FM 1097.

The trooper then initiated a pursuit, moments later a Montgomery County Sheriff’s Department K-9 unit also joined in in case the occupants fled on foot the dog would be available.

The vehicle continued north on Highway 75 to New Waverly where they turned onto State Highway 150. They continued across Interstate 45 on 150 which turns into FM 1374. On FM 1374 running 80 miles per hour at times they maneuvered around many dangerous curves.

Huntsville Police and DPS along with Walker County Deputies set up spikes at FM 1374 and Veterans Parkway. Just one mile before the chase reached them the Honda lost control in a steep curve flipping it struck a utility pole roof first.

Life Flight was immediately dispatched but disregarded when EMS arrived on the scene and determined the driver was deceased. Moments later Life Flight was requested a second time when officials discovered a second victim in a pasture that had been ejected.

Gustavo Roberto Casillas, 13, of Conroe sent to Hermann Hospital where he is in stable condition. He also suffers a severe leg injury.

Huntsville and Walker County firefighters worked almost an hour to free the driver from the vehicle. Entry to the vehicle had to be made through the floor board.

The 14-year-old driver from Conroe was pronounced dead at the scene by Walker County Precinct 2 Justice of the Peace Richard Duncan. He ordered the victim be taken to the Montgomery County Forensic Center for autopsy. He was identified as Kolin Johnson.

DPS Troopers left the scene approximately 4 a.m. for the sad task of notifying family members of the crash and the loss of the unlicensed 14-year-old.

Troopers were also working with the school district to attempt to put counselors in place.

Entergy was notified but it was determined even with the force of the impact the utility pole was just scraped. No power outages came from the crash. 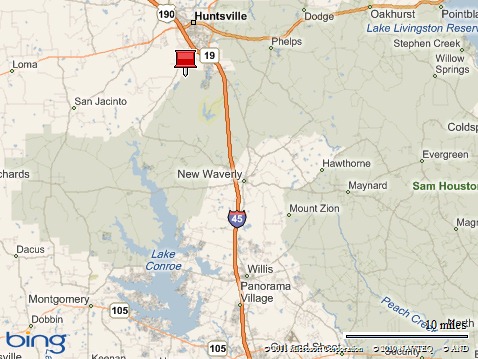