A 22-year-old suspect accused of shooting at deputies during a dangerous high-speed chase in northwest Harris County overnight was taken to the hospital after being caught by a K-9.

He will be taken to the Harris County Jail after he’s released from the hospital.
The 8-mile chase came to an end after Mackey crashed into a car not involved in the chase on SH-249 and Antoine Drive.

At one point, Mackey and deputies were going more than 100 miles per hour, officials said.

The chase began just after 1 a.m. Friday when deputies tried to pull the suspect over in the 12600 block of Jones Road near Cypress N. Houston Road.

When Mackey tried to get onto SH-249 from Grant Road, deputies said he pulled out an automatic handgun and fired approximately three shots at officers.

No one was hit.

“Any injuries?” a dispatch worker asked on radio traffic. “Negative, he’s still south on 249. He’s way ahead of me. He’s going 100, probably 110. Shots are fired. Y’all be aware,” the officer replied.

After shots were fired, deputies backed off from the chase. Not long after, they were alerted to a major crash.

Investigators said Mackey crashed into an SUV, hitting people who were not involved. None of them were seriously hurt.

Video from the end of the chase shows people being treated at the scene.

There were several people at a nearby Whataburger who saw and heard the crash. Some of them ran to help.

“Yeah, but we didn’t know why the siren was on. We just knew it was a wreck,” one witness said.

“They were already chasing him because they came so quick. The helicopter was already on top,” another woman said.

After the crash, Mackey got out of the car with his handgun and fled on foot, deputies said.

A DPS chopper and Constable K-9 Max were able to track him down in a nearby wooded area.

Mackey reportedly refused to shows his hands while hiding in a thick brush. That’s when K-9 Max was deployed and performed a bite and hold.

The suspect was rushed to an area hospital for puncture wounds to his hands and genital area.

The K-9 found his firearm hidden in a storm drain, investigators said. It was found to have been illegally converted to be fully automatic.

Investigators also discovered that the car Mackey was driving was stolen. 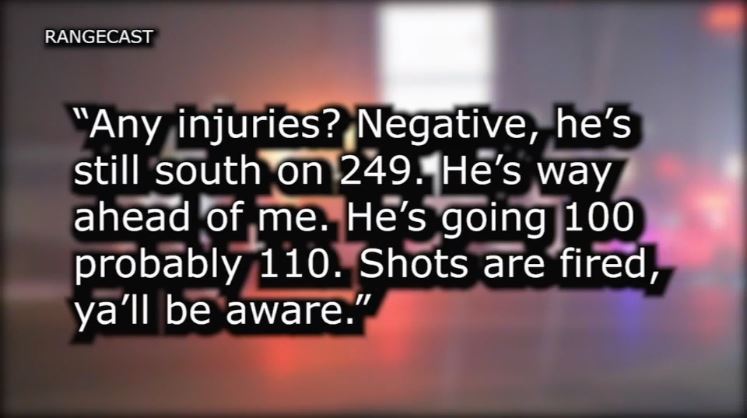