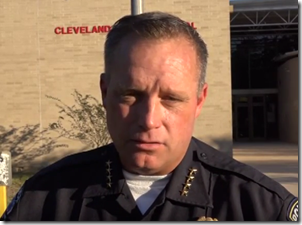 Cleveland ISD Police Chief Rex Evans said around 4 p.m. Friday, his agency received a call from Cleveland High School stating a student had collapsed in the school’s rear parking lot. He and other officers responded and assisted coaching staff in administering CPR to the 14-year-old boy as they waited for an ambulance to arrive.

“We were able to deliver a shock with an AED,” Chief Evans said. “Fire and EMS arrived. We worked him very hard. Fire and EMS did all they could possibly do.”

Medics transported the student to the Cleveland Hospital Emergency Room and he was pronounced dead a short time later.

The teen was not participating in athletics at the time, and there were no signs of foul play, leading officials to believe the cause may be some kind of unknown health issue that will be revealed by an autopsy, he said.

A high school football game is scheduled at the school tonight. Chief Evans said school officials were meeting to determine whether or not the game would take place.

MCPR will continue to update this story as information becomes available.