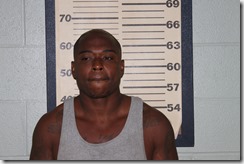 On Thursday, July 23rd, 2015 Cleveland Police Officer Kristie Rocha was dispatched to 1900 block of Center Avenue in regards to a man with a gun.

While responding to the location, Officer Rocha was advised by Dispatch the subject was leaving the location in a gold in color Chevrolet Tahoe. Officer Rocha located a vehicle matching the description provided to her traveling at a high rate of speed on Martin Luther King Drive. Officer Rocha proceeded to catch up to the vehicle.

The vehicle traveled to Samuel Wiley Drive where the driver exited the vehicle and began to flee on foot from the Officer. The subject ran to south side of a building (old CC Driver Church) located at the corner of Samuel Wiley Avenue and Deputy Odell McDuffie Drive as Officer Rocha exited her vehicle, she observed the subject throw an object into the soffit area of the building. As the subject attempted to return to his vehicle, Officer Rocha was able to detain him.

Upon detention of the subject, Officer Rocha returned to the area where she observed the subject attempt to hide the unknown object. A check of the location revealed a black sock containing a Cobra .380 Caliber Handgun.

The fleeing male was identified as Terrance Jerome Williams (age 33) of Cleveland. A check of Williams’s Criminal History revealed previous charges of Assault on a Peace Officer, Assault Family Member, Criminal Mischief, Possession of Marihuana, Possession of a Controlled Substance, Manufacture/Delivery of a Controlled Substance and Resisting Arrest.

Terrance Williams was charged with Unlawful Possession of a Firearm by a Felon (3rd Degree Felony).

Chief Broussard advises “Response time was a key factor in this case, Officer Rocha was able to arrive on location within three minutes of the initial call”. “Time and time again, our Officers get called to serious crimes in progress and they never hesitate to respond, often putting their own safety at risk to protect others”. “I want to commend Officer Rocha and her fellow Cleveland PD Officers who backed her up”. “I also want to thank the Liberty County Sheriff’s Department for their timely assistance”. “This cooperative effort lead to the capture of career criminal”.