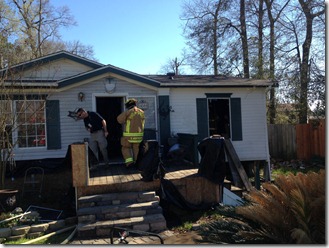 In January of 2014, Cut N Shoot Firefighters and the Board of Directors for Montgomery County Emergency Services District #12 realized a long sought after goal when they began a 24 hour manning of a new fire station in the Security Community. Prior to that time, the Cut N Shoot Fire Department was staffed with 3 firefighters at their main station, backed up by the Department’s Volunteers and neighboring mutual aid partners. On January 20th, Firefighters moved into Fire Station 22 in Security and have already responded to a variety of calls including numerous Motor Vehicle accidents and 4 building fires.

On Thursday afternoon, just after 2 pm, Cut N Shoot firefighters were dispatched to the first of two house fires that had broken out in a home in the Emerson Estates Subdivision off Hwy 105 East. The first Cut N Shoot engine arrived within 4 minutes of the initial call and found a bedroom on fire. The quick response time and additional crews allowed firefighters to safely initiate an interior attack on the home, limiting the fire to the one bedroom, saving the home and its contents. The home’s two occupants, a mother and her child, had safely evacuated when the home’s smoke alarms sounded.

Firefighters declared the fire under control within 5 minutes of their arrival, and set about the task of clearing smoke out of the home and cleaning up while an Engine from the North Montgomery County Fire Department staged at the Cut N Shoot station to cover the area.

A few minutes later, a second house fire was reported on FM 1484 a short distance away. The first unit on scene was the crew from the North Montgomery County Fire Department covering the area and they reported a mobile home heavily involved in fire. The Cut N Shoot crews soon joined them as well as other firefighters from the North Montgomery County and Caney Creek Fire Departments. The homeowner was not home when the second fire broke out. He reported that his clothes dryer was running when he left earlier and when he returned home he found that fire had spread throughout the home. The home was determined to be a total loss and the investigation into the exact cause of the fire is ongoing.

MCFMO Investigators determined that the first fire in Emerson Estates originated on a bed and was ignited by a child playing with a lighter. Although most cigarette lighters are now required to be child-resistant, that is not the same as child-proof, and many novelty lighters have no such safeguards.