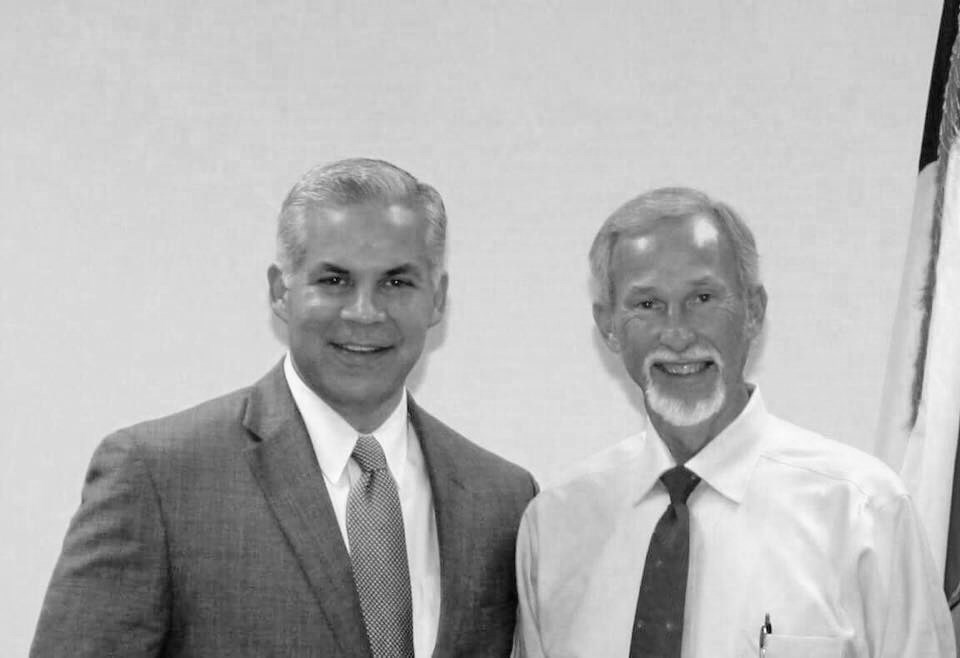 District Attorney Brett Ligon, one of the most respected men in Montgomery County has thrown his support behind James Metts, currently Precinct 4 Justice of the Peace, in his bid to become Commissioner of Precinct 4.
Ligon, who has family in East Montgomery County, has been outspoken regarding his admiration for Metts before, calling Metts “the face of integrity” in a post on social media dated October 7, 2016. In the post, Ligon detailed a civil case in Metts’ court, in which Ligon’s uncle was the plaintiff. Judge Metts knew the two were very close, and had a tremendous amount of respect for both. However, based on the facts of the case, Metts wound up ruling against the sitting district attorney’s uncle. Ligon has based his career on the Latin legal phrase Fiat justitia ruat cælum, which translates to “Let justice be done though the heavens fall,” which sums up his dedication to justice, regardless of any factors that may wrongly influence someone in a position of power.  Ligon wrapped up the post with, “So next time you go looking for a conspiracy or ‘the good ole boy’ system, go look somewhere else than Judge Metts’ courtroom. In a world full of stories of people looking to profit from their relationships this one stood out to me as the way it should be. All the time. In every situation. Bravo Judge Metts!”
The DA was unable to attend Metts’ Unity Rally in Splendora in December, due to a family obligation, but a sent a message via Pct. 4 Constable Rowdy Hayden Stating he was “excited for Judge Metts’ candidacy” and that he had “personally seen the highest application of ethics and integrity by Judge Metts”.
The 15-year Justice of the Peace has also expressed his admiration for Ligon many times, specifically how he tackled the epidemic of intoxicated driving in Montgomery County. Upon his election in 2008, Ligon brought in Warren Diepraam, who was nationally recognized by multiple organizations including Mothers Against Drunk Driving as the top vehicular crime prosecutor. Ligon also brought the highly esteemed First Assistant District Attorney and now 9th District Court Judge Phil Grant, and many other “big guns” from Harris County, restructuring the DA’s Office from top to bottom. Metts noticed the presence of Ligon team members, and often Ligon himself, on the scenes of fatal accidents and major crimes. Metts has repeatedly stated he has no doubt the changes made by Brett Ligon have saved lives in Montgomery County. Metts has even expressed this to Ligon saying, “How many lives did you save today, Mr. Ligon?”
Metts said he was thrilled to have the support of someone known for having such high standards, and whose life has been dedicated to justice.
“It’s difficult to express how honored I am to have the support of District Attorney Brett Ligon,” Metts said. “I appreciate the tough stance he’s taken on all crime, as well as the emphasis he has placed on restoring and maintaining integrity in county government.”
Metts is facing one-term incumbent Jim Clark, and second attempt candidate Bob Bagley in the Republican Primary Election on March 6, 2018.  Early voting begins Tuesday, February 20, 2018. 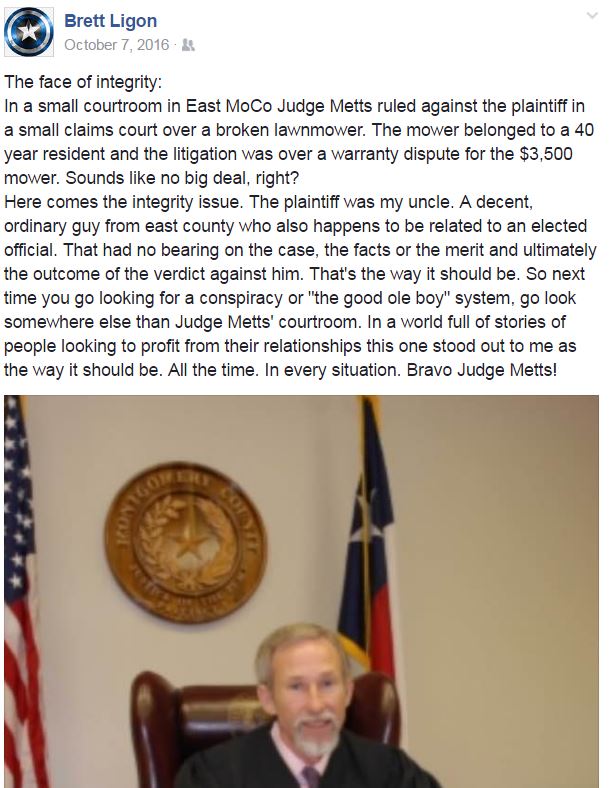