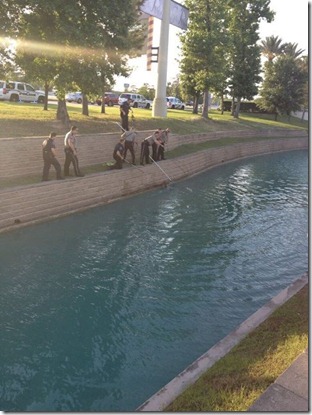 In the early evening hours of Thursday, April 19, Shenandoah Police Officers assisted by deputies from the Montgomery County Sheriff’s Office, officers from the Oak Ridge North Police Department, and a Milstead Towing Company driver rescued a deer from the waterway in the Portofino shopping center. The deer had become trapped and was at risk of drowning after it had crossed the freeway in front of the shopping center with a small heard. The deer was uninjured and, with the assistance of A Plus Towing Company, was relocated to a nearby wooded area a safe distance from the freeway. The rescue team was surrounded by a group of people who had stopped to watch as the events unfolded and received a round of applause and cheers as the deer was brought safely out of the water. It is believed that the rescue was captured on several cell phone cameras.