As has been demonstrated time and time again in law enforcement, what appears to be nothing more than a simple traffic stop for a minor violation can escalate into a dangerous situation quickly with resulting felony charges. So it was on Thursday, February 2 at approximately 1:45 when Liberty County Deputy Sheriff Shandalynn Rhame spotted a white Toyota “Camry” traveling south bound on State Highway 146 at CR 2098 driving erratic. A quick check with the dispatcher on the license plate showed the plates were expired and that insurance was unconfirmed. The vehicle pulled into a gas station where two men got out of the car. Deputy Rhame pulled in behind the vehicle and advised the driver of his expired license plates. After requesting identification from both men and finding that the I.D. of the passenger was false, the Deputy called for back-up. Fellow deputies responded as did Constables from Pct. 3.

As the back-up units pulled into the gas station, the passenger who was later identified as Wil Addison Caddie decided he was going to flee the scene into the nearby wet and muddy woods. However, he didn’t plan on Deputy Bryan Sorola being much faster than he was and while deep in the muddy wooded area the two met up where Caddie resisted arrest. It also resulted in the quick realization by Caddie that Deputy Sorola was not only faster afoot than he was but he was also more agile and after a brief struggle in the mud, Caddie was handcuffed and brought back to the gas station. Fortunately neither Caddie nor the deputy sustained any injuries.

The driver, identified as Jonathan Chez Candelaria, in the meantime had also been handcuffed and placed under arrest by Deputy Rhame. A search of the men’s vehicle resulted in finding a large number of electronic devices, several watches, drug paraphernalia, marijuana and other items of interest. After the real name of Wil Caddie was revealed, it was found he was wanted on two felony warrants out of San Jacinto County for bail jumping and Manufacture and Delivery of a Controlled Substance in addition to an active Misdemeanor warrant out of Harris County for Evading Arrest and an additional four class “C” warrants out of Liberty County for traffic offenses.

Sheriff Bobby Rader said this case is an outstanding example of how quickly what appears to be an otherwise minor infraction of the law can develop into a situation that changes the complexion of any deputies contact with a person or persons and requires the Deputy to suddenly shift into a much higher degree of caution and defensive tactics to deal with felony offenders. Quite often this dispels the idea that all an Officer does on a daily basis is ride around in a patrol car and write reports. It was only through the alertness and quick action by Deputy Rhame and the swiftness and agility of Deputy Sorola that resulted in the clearing of these criminal offenses.

Both Jonathan Chez Candelaria (WM), DOB 12-22-85 and Wil Addison Caddie (BM), DOB 12-20-87 who claimed to be from the Raywood area of Liberty County were placed in the Liberty County Jail on outstanding warrants and new charges while the investigation continues.

According to Deputy Rhame’s the following charges were filed. Jonathan Chez Candelaria was charged with Suspended Driver License, Possession of Drug Paraphernalia, Expired Registration and Failure to Maintain Financial Responsibility.

Wil Addison Caddie was charged with Failure to Identify and Fugitive Intent to Give False Information, Evading Arrest, Possession of Marijuana and booked on the other outstanding warrants 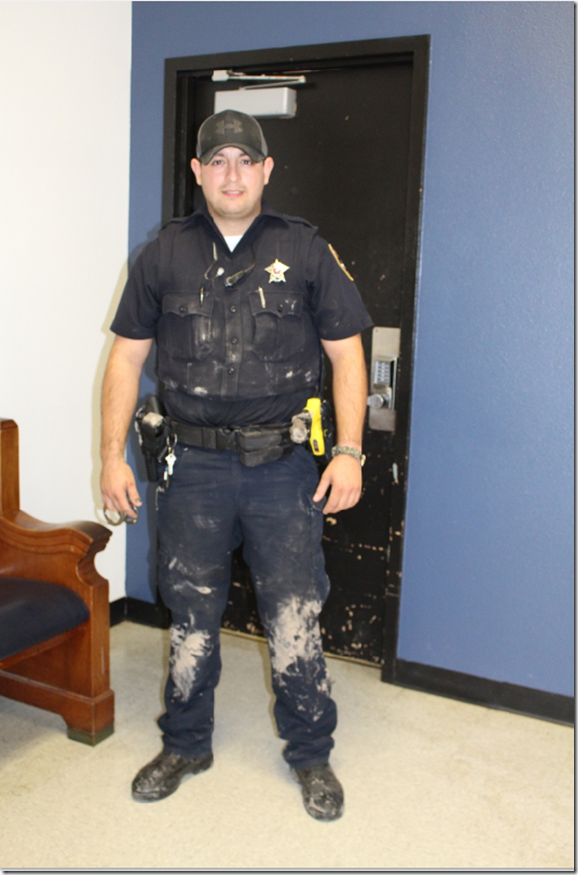