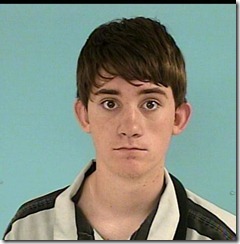 – On the eve of prom weekend, a Caney Creek High School student is in jail. He’s accused of doing something that killed a classmate.

A senior and star baseball player, who would be getting ready for prom, is now charged with drinking, doing drugs and causing the death of one of his classmates.

At 2am on March 14, DPS troopers find a mangled 2002 Saturn. Inside of it were two teenagers. The driver was 18-year-old Daniel Freund. His passenger was 16-year-old Halie McDonald.

Investigators say Freund was speeding southbound on 1485. He missed a curve, ran off the road, sliding into a pole. McDonald died several hours later at the hospital.

"A sample of his blood was taken to the Department of Public Safety for evidentiary purposes," prosecutor Andrew James said.

DPS records just released show Freund was drunk at the time of the crash. His blood alcohol level at .11 percent. And he tested for two drugs,  however marijuana was all they found.

When the test results were completed by the lab and sent to DPS, the Montgomery County District Attorney was notified of the findings. Freund was arrested at his home just after 6 am Friday morning.

We asked the boy’s father his thoughts on the charge against his son.

"We don’t have any comments right now, sorry," he said.

And while McDonald’s grandparents call the news bitter sweet, they say it’s time someone pays the price for the loss of their precious McDonald.

"His parents they must be going through a hard time, they’ve got to be, and I really feel for them," Kisner said. "We’re not gonna have her, we’re never gonna have her until we pass over and go see her."

Freund is charged with intoxication manslaughter. His bond is set at $100,000.

"Our criminal justice system is set up to protect the rights of all those accused. We ask that no one rush to judgement as all the facts are not yet known. We have been retained to represent Daniel, however, at this time we have not been given access to the State’s evidence.

"We send our heartfelt condolences to Halie’s family in their time of grief. While we realize that nothing can replace the loss they have endured we ask that the public give the justice system time to develop and scrutinize all the facts and evidence in this case.

"We will do our very best to defend our client and at the same time be respectful of the loss the family has endured. This case is truly a tragedy for everyone involved