Montgomery County District Attorney Brett Ligon cautioned newly elected Harris County District Attorney Kim Ogg that “she doesn’t speak for the State of Texas or the majority of elected District and County Attorney’s across the State” and warns against her role in becoming a spokesperson for a liberal marijuana legalization organization (see below – flyer’s displayed at the Texas Capital this week).

“Despite a rise in violent crime rates in Harris County, Ms. Ogg chooses to focus her attention on the issue of legalization of marijuana,” Ligon said. “I hope it’s a mistake in judgment on her part and not a sign of things to come. I respect the jurisdictional differences between Montgomery County and Harris County, and I hope she does too.

“Unlike Harris County, Montgomery County will not become a sanctuary for dope smokers. I swore an oath to follow the law – all the laws, as written by the Texas Legislature. I don’t get to pick and choose which laws I enforce,” Ligon said.

“Further, I have my doubts about the study that her organization touts regarding the dismissal rate for misdemeanor cases. Experienced prosecutors know that misdemeanor possession cases are usually filed in combination with other charges and are likely dismissed as part of a plea to another matter, or disposed of through pre-trial diversion programs, only after the defendant has had the opportunity to receive drug and alcohol treatment and counseling,” Ligon concluded. 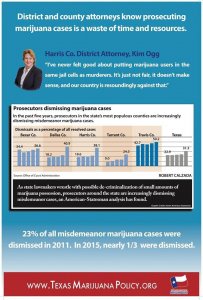 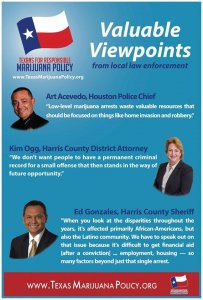