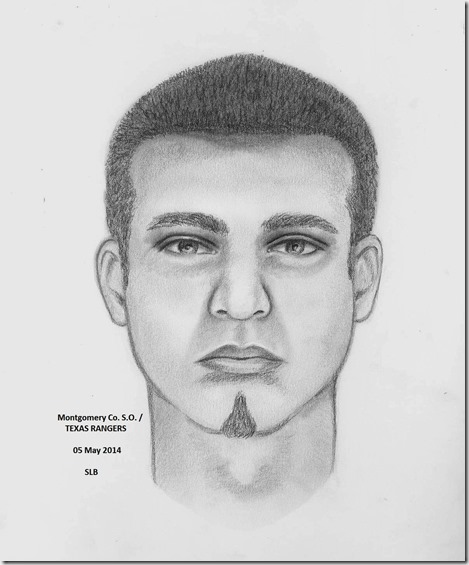 The Montgomery County Sheriff’s Office is requesting the public’s assistance in identifying a suspect in a composite sketch, in reference to an ongoing sexual assault of a child investigation. The suspect was last seen in the area of the Imperial Oaks neighborhood in South Montgomery County in the early morning hours of April 29, 2014.

The suspect was described as Hispanic male of medium complexion, approximately late twenties, medium-to-slight build, and muscular in the arms and abdomen. The suspect had a short “buzzed” haircut, possibly faded on the sides, which appeared to be manicured across the front to create the really straight hairline. The suspect had black hair, brown eyes, and un-manicured eyebrows. The suspect was reportedly wearing a dark colored, possibly purple, Nike T-shirt and black basketball shorts.

If you have information regarding this Sexual Assault, please contact Detective S. Spencer at 936-760-5876 or Montgomery County Crime Stoppers at 1-800-392-STOP.

Crime Stoppers will pay up to a $1000 cash reward for information leading to an arrest or indictment of a felony crime. Call 800-392-STOP (7867). Anonymous tips can also be made through the Montgomery County Crime Stoppers.