Just after midnight, Conroe Police received reports of of an obstruction in the roadway at Gladstell and Frazier. When units arrived on the scene they found a traffic alert trailer had been struck and severely damaged. Witnesses said a silver truck was traveling north on Frazier from Gladstell when the driver lost control, crossed the median and struck the sign flipping it into the roadway. The driver then fled the scene. Witnesses said it appeared to be a silver or light colored Chevrolet or GMC truck.

Anyone with information on this vehicle or who witnessed the crash is asked to call Conroe Police Department.

It is believed the trailer, which is valued at close to $20,000 may be a total loss.

Speedy’s Wrecker Service was able to right the trailer and remove it from the scene. 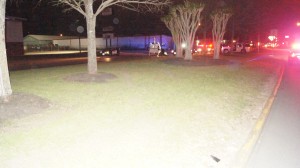 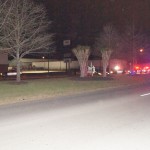 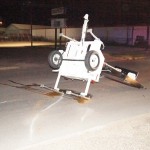 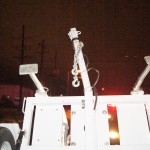 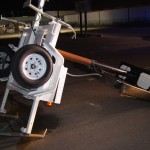 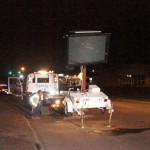