A deputy was transporting a prisoner who attempted to kick out his window. He requested assistance. As he was stopped on the side of Research Dr. the Montgomery County BAT Van was close and responded as did two other patrol units.

Calli Dretke, 25 of 12302 Browning Lane in Montgomery was intoxicated and  driving east bound on Research as she approached the marked units on the side of the road with their lights activated she struck the rear of the BAT Van causing extensive damage to it. Dretke continued by striking the other patrol cars also.

Deputies were standing near the cars when the crash happened. Deputy Jones who was standing at the left front of one of the patrol cars was able to jump on top of his car to avoid serious injury, however his leg was not completely out of the way when she struck and broke one of his legs.

DPS and the Montgomery County District Attorneys Office representatives were on the scene to conduct the investigation.

Dretke was arrested and transported to the Montgomery County Jail where she is charged with Intoxicated Assault on a Peace Officer. She is being held on a $50,000 bond.

Jones is expected to make a full recovery. 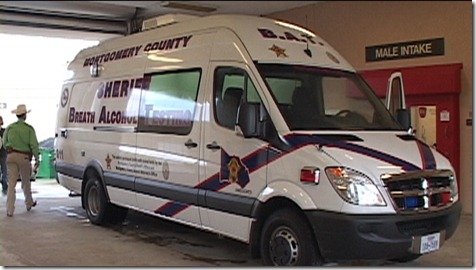 THIS WAS THE BAT VAN NEW