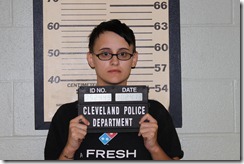 The investigation began 2010 when concerned parents contacted the Cleveland Police Department in reference to their daughter’s friend. The parents found what appeared to be “love letters” sent to their daughter from Brittany Morgan. The parents contacted the Cleveland Police Department who conducted an investigation, and was unable to establish sufficient enough evidence to file any charges at that time.

On October 15th, 2013 Cleveland Police Officers were called to the 1300 block of south Franklin Street to the residence of Brittany Morgan in regards to a disturbance. While on scene of the disturbance, an anonymous person reported to the responding Patrol Officers that “they believed Brittany Morgan was having sexual contact with underage females”.

A report was generated and forwarded to Detective John Shaver for further investigation.

Detective Shaver reviewed all past reports involving Brittany Morgan, and re-assessed the original reported allegations, and evidence made in 2010. Follow-up interviews were conducted with other possible victims and witnesses. Through the investigative efforts of Detective Shaver, he was able to gather additional evidence, and establish the fact that probable cause did exist. An arrest warrant for Brittany Morgan was issued by City of Cleveland Municipal Court Judge Bob Steely for the sexually assaulted of a fourteen year old female in 2010.

minors, which in turn led to her taking advantage of them”, according to Detective Shaver.

Should other evidence or victims surface in this case it may later lead to further charges being filed.

Brittany Morgan is currently being held in the Liberty County Jail, she has been charged with: “Sexual Assault” – Second Degree Felony. Justice of the Peace Precinct #1 Stephen Hebert set Morgan’s bond at ($50,000) fifty-thousand dollars.