At 11:56 am Liberty County started getting calls for shooting on County Road 4901 near Dayton. Units arrived on the scene to find a father and daughter shot in one mobile home and critically injured. and three victims down the street. All three were deceased. Two others were in critical condition and were Lifeflighted to Memorial Hermann in Houston, THe suspect, identified as Michael Wetstein, 41, who lives on the same street. ran into the woods but was apprehended. He is being charged with Capital Murder. Investigators are just arriving on the scene and have no additional details. 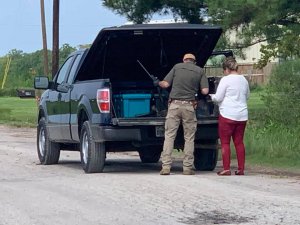