Last year after residents of the county started pushing to stop wreckers from racing to scenes a rotation policy was put in effect. The dispatchers send an alert out through a phone app which gives the driver a location of a crash or prisoners’ vehicle to respond to. The wreckers have 20-minutes to respond to the scene before the next wrecker in line is dispatched and the first is disregarded and put on the bottom of the list. Heavy duty wreckers have 1-hour to respond. It has worked in some cases and hasn’t in others. At about the same time the Sheriff encrypted the radio system so it could no longer be monitored. This not only stopped wrecker drivers from going to scenes but also as he said stopped the bad guys from knowing where the deputies were. Montgomery County was the only one that implemented this. Harris County, Houston Police, Liberty County, Walker County, Waller County, Grimes County, or DPS have seen a reason to spend the thousands if not millions to make the move. The other thing it did do was stop the citizens of Montgomery County from knowing what is actually happening. The media was included in the radio lockout. Many times we here at MCPR are asked by readers what is happening and unless another reader has tipped us off on something it is unknown until we either go to the scene or send an inquiry to the Sheriff’s Office. If a prisoner is arrested on a bicycle a wrecker is called out to load the bicycle. That driver will never make anything on it as who would pay several times the value of the bike to get it out of impound? Back in the day, many officers depended on wreckers for backup as few deputies were close by. If a deputy became involved in a fight and called for help, it was usually a wrecker driver that was there first. On crash scenes, yes many wreckers would run to the scene, and yes many speeds as people called it like fools. But once they were there they assisted in blocking traffic or assisting clean up. Now a crash scene on a freeway may take as many as ten patrol cars off the streets. If it is a fatal crash that normally turns into almost five hours. A few weeks ago in a crash on I-45, a motorist came too close to a patrol car and took the mirror off. If a crash does happen now and the roadway is blocked wreckers have no way to get to the scene in 20-minutes. Oh yes, they end up speeding to make it to a scene in 20-minutes. But then to get to a scene, the only way is to counterflow down the wrong side of the road. If a motorist who is tired of waiting makes a u-turn and hits the wrecker, who do you think is at fault? If a deputy had a flat it was as simple as getting on the radio and asking for a Friendly wrecker which within minutes several would respond. If debris was in the roadway a call to TXDOT at night can take hours. A simple call on the radio and several wreckers would appear with brooms and clean up the mess.
Monday night was one example of this. Several MCSO units and DPS units had just left a fatal crash in Kingwood. As they traveled north on the I-69 feeder between North Park and FM 1314 they encountered three lanes of debris. This was broken glass, papers, toys, clothing, bottles of vitamin supplements, clothes hangers, etc. There was no way to call a wrecker so they contacted TXDOT and waited. Several patrol cars out of service blocked lanes due to about 150 feet of debris that could cause tire damage or cause a crash. After about 30-minutes of waiting on TXDOT, the Trooper called his mother who lives close by. He asked her to bring him a broom which five minutes she pulled up and out came a broom. The trooper using a kitchen broom cleared a lot of debris before TXDOT arrived with a two-man overtime crew to sweep the lanes with blowers and brooms. These Troopers are dedicated to keeping the roadway of Montgomery County open. They at times will use a wrecker for a crash scene that is close by, usually tailing them just over 100-yards. Tonight, Slinky Knox was called on the phone to respond with a broom as a friendly wrecker. He turned them down. This was due to an incident earlier with a run-in with Sheriff’s Wrecker inspectors on a scene that he had pulled up on. It was the same thing that happened to another wrecker in the Willis area for stopping to help a wrecker clean debris off the roadway. Even though it wasn’t his turn in the rotation. He was temporarily suspended from the rotation for doing so. 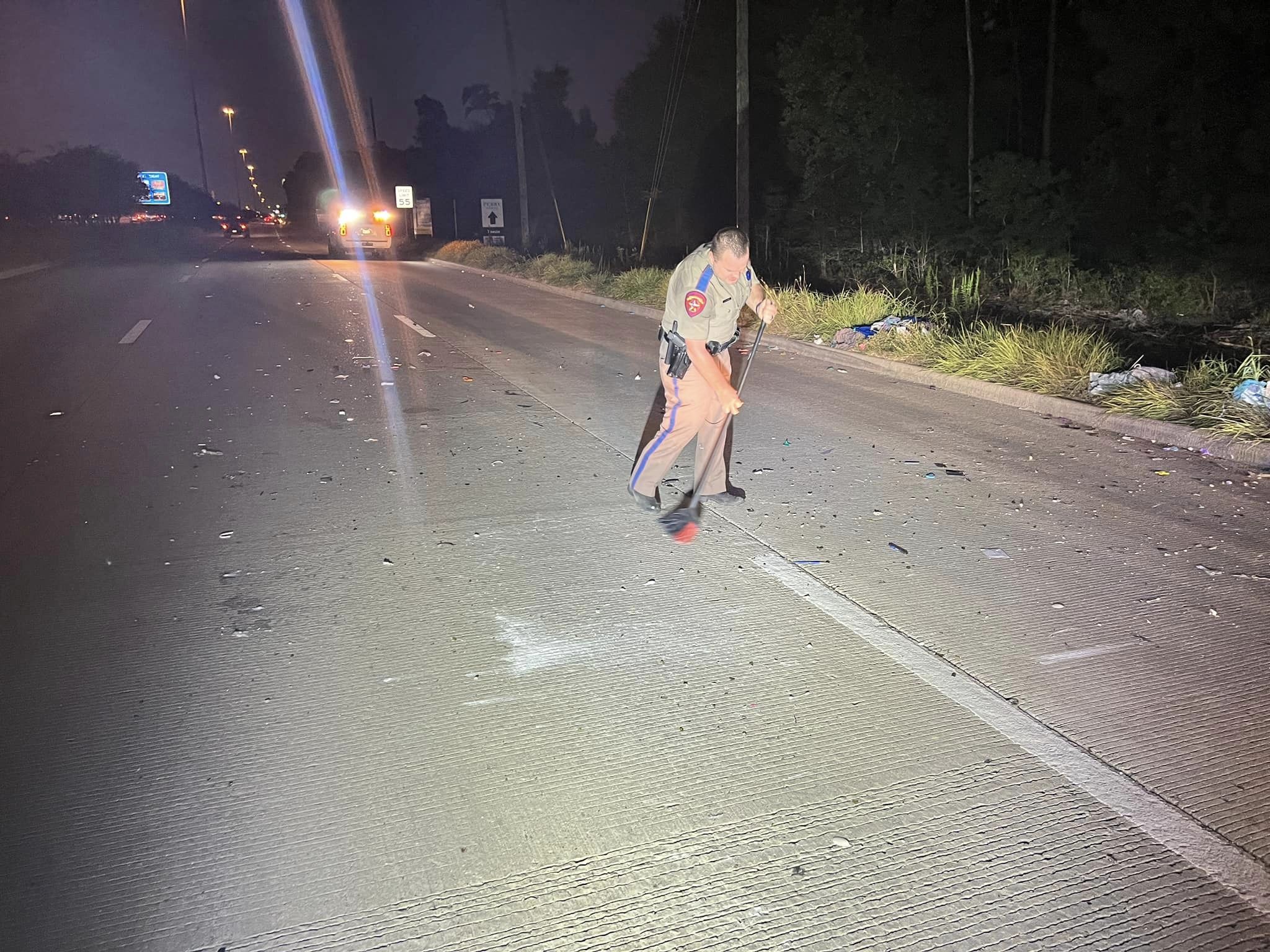 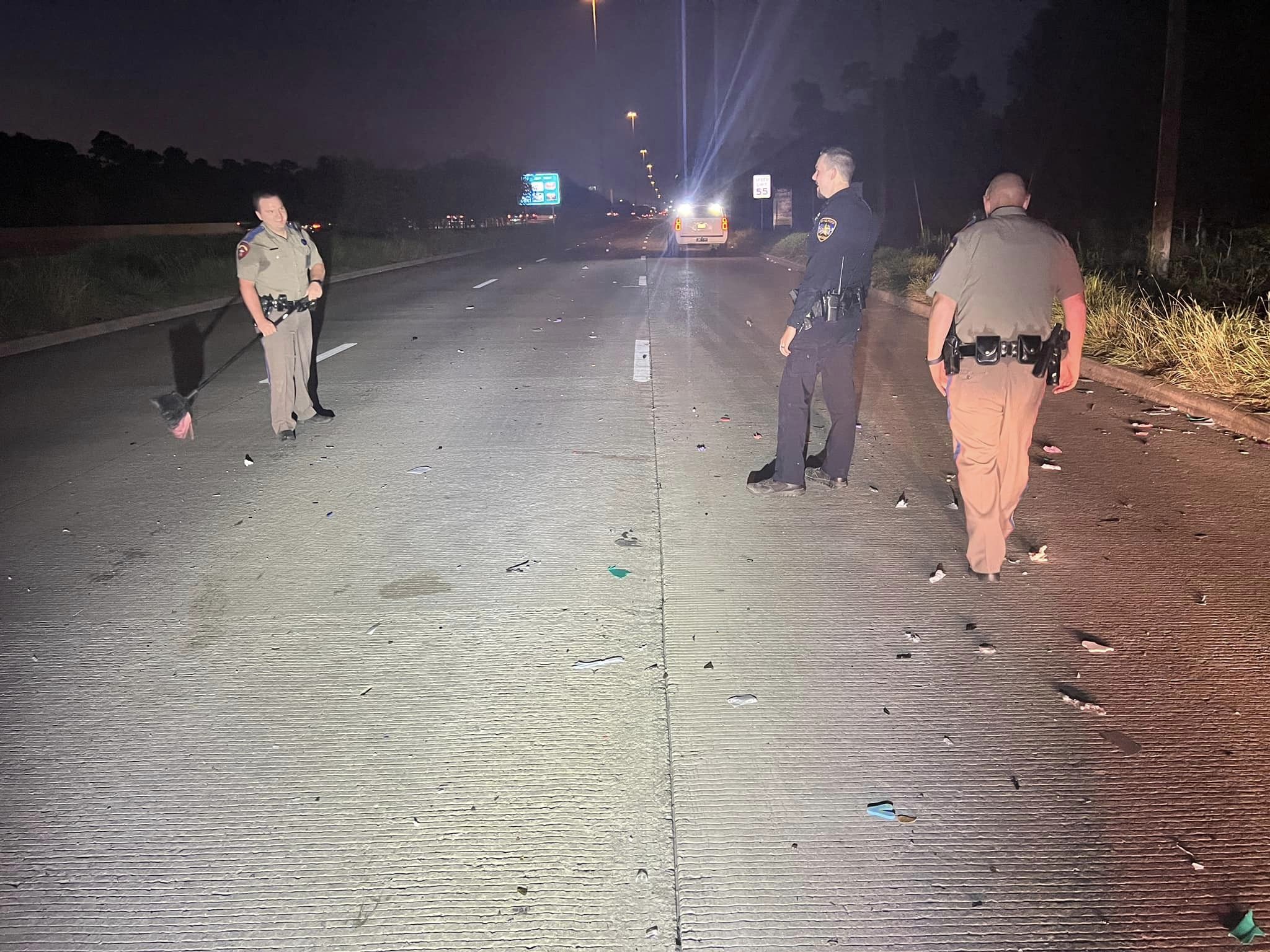 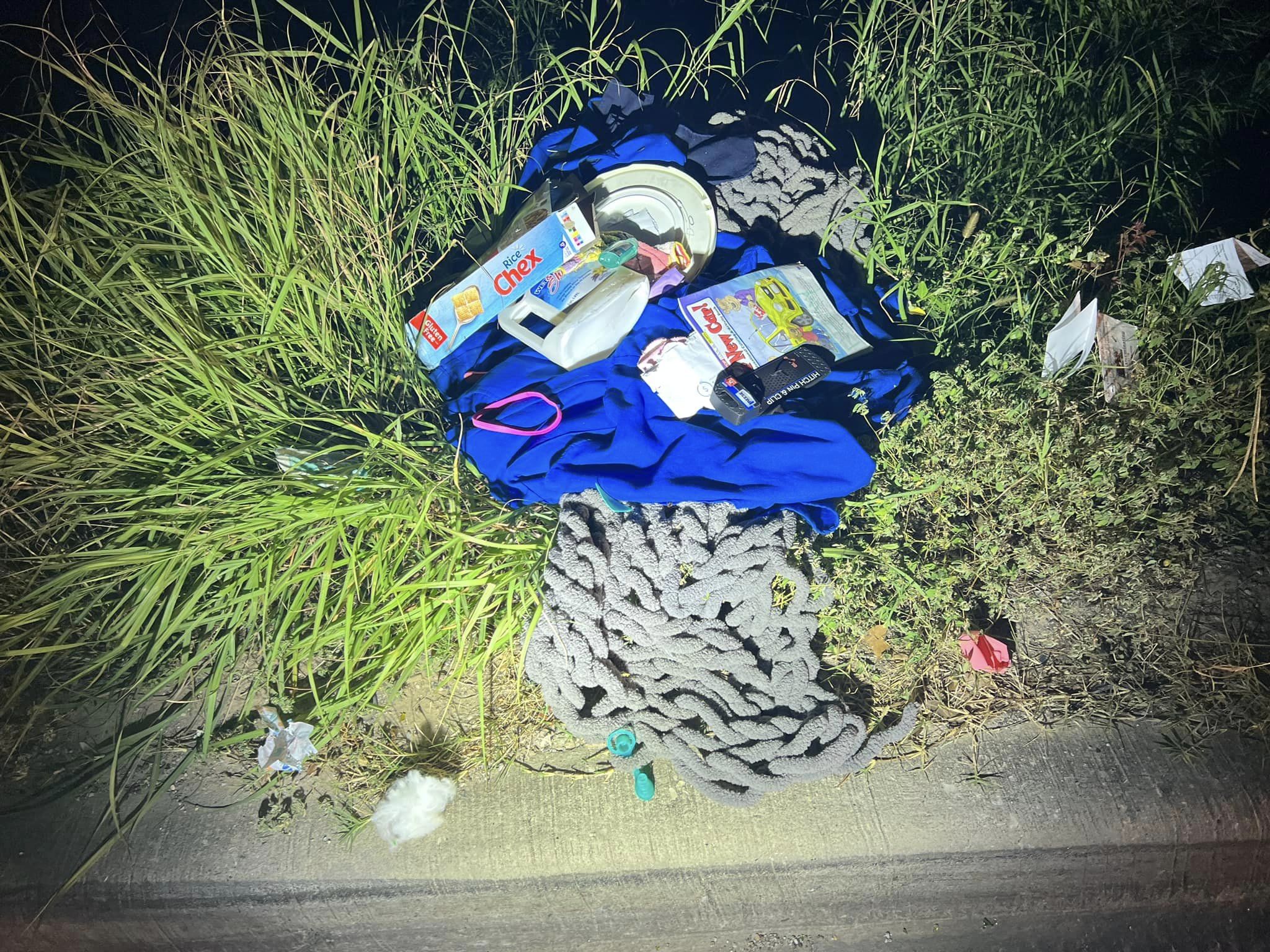 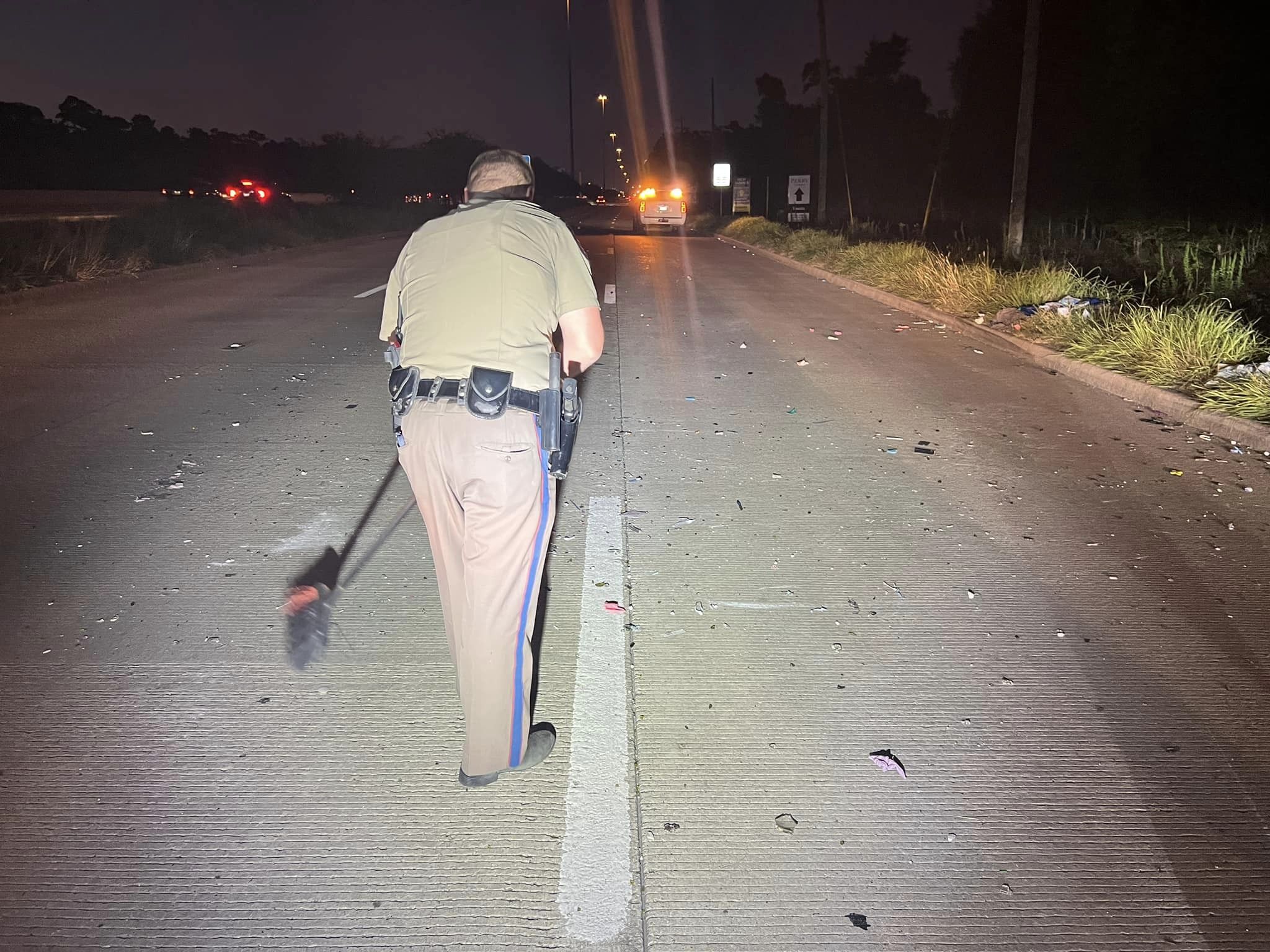 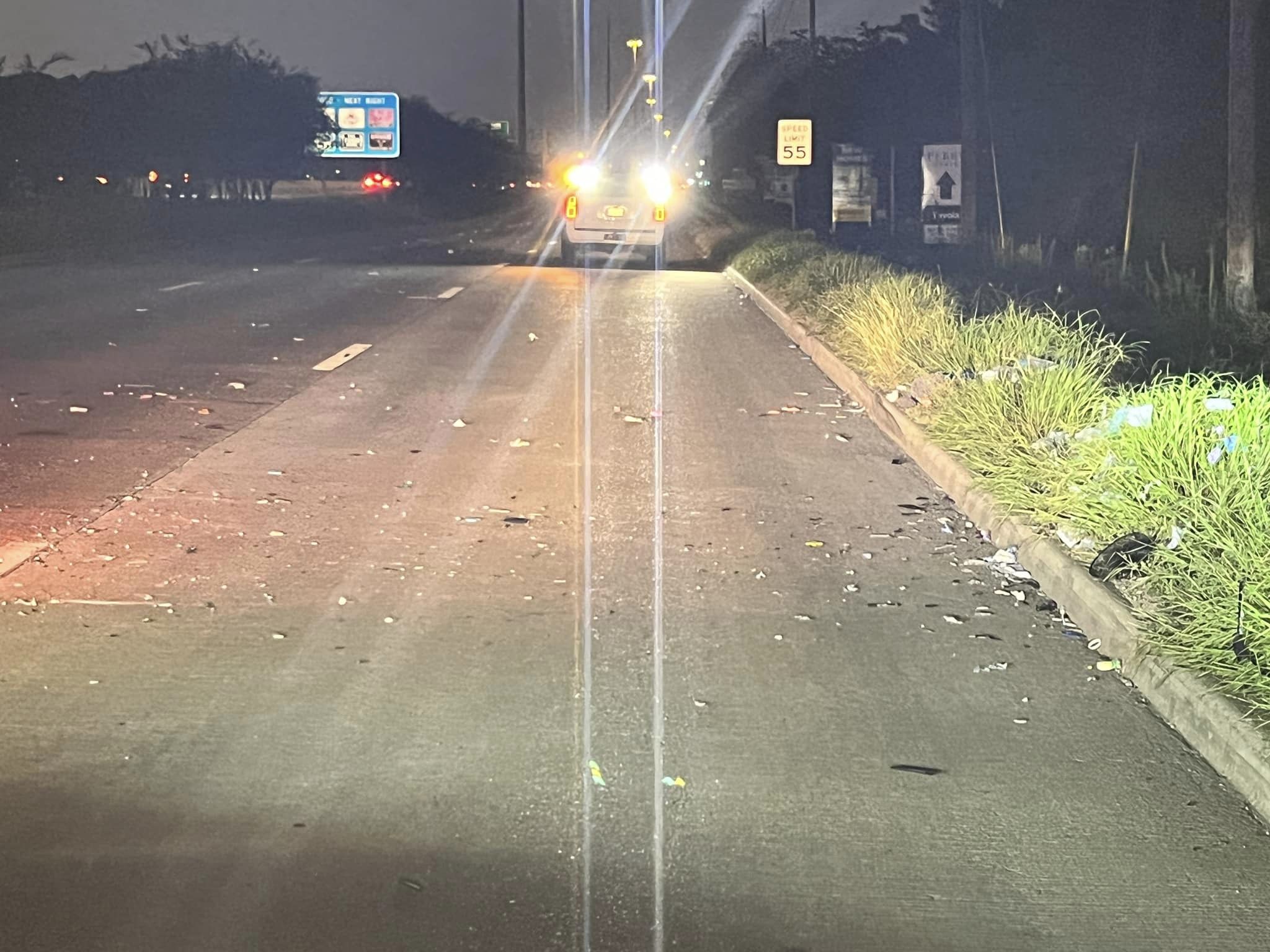 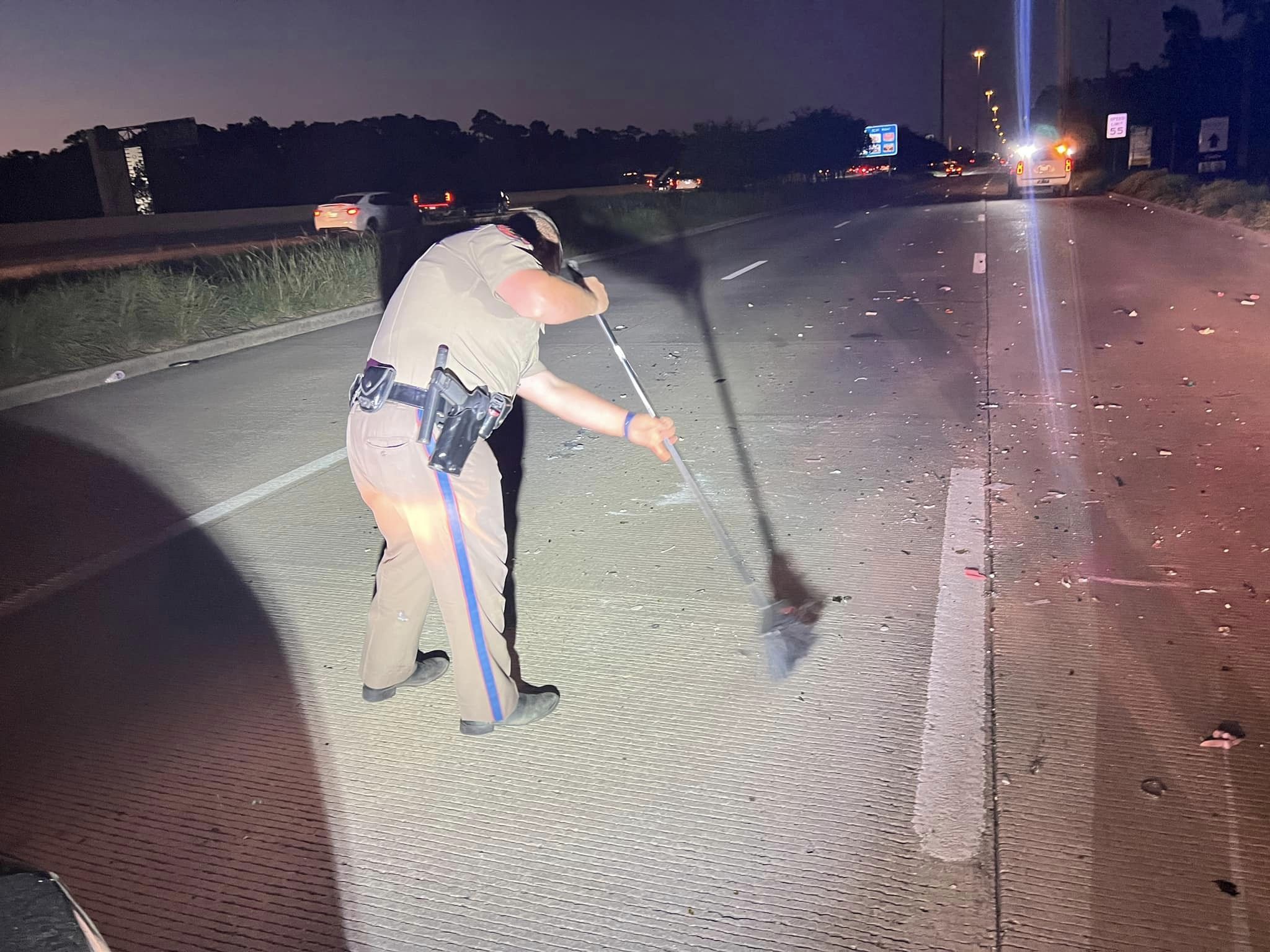 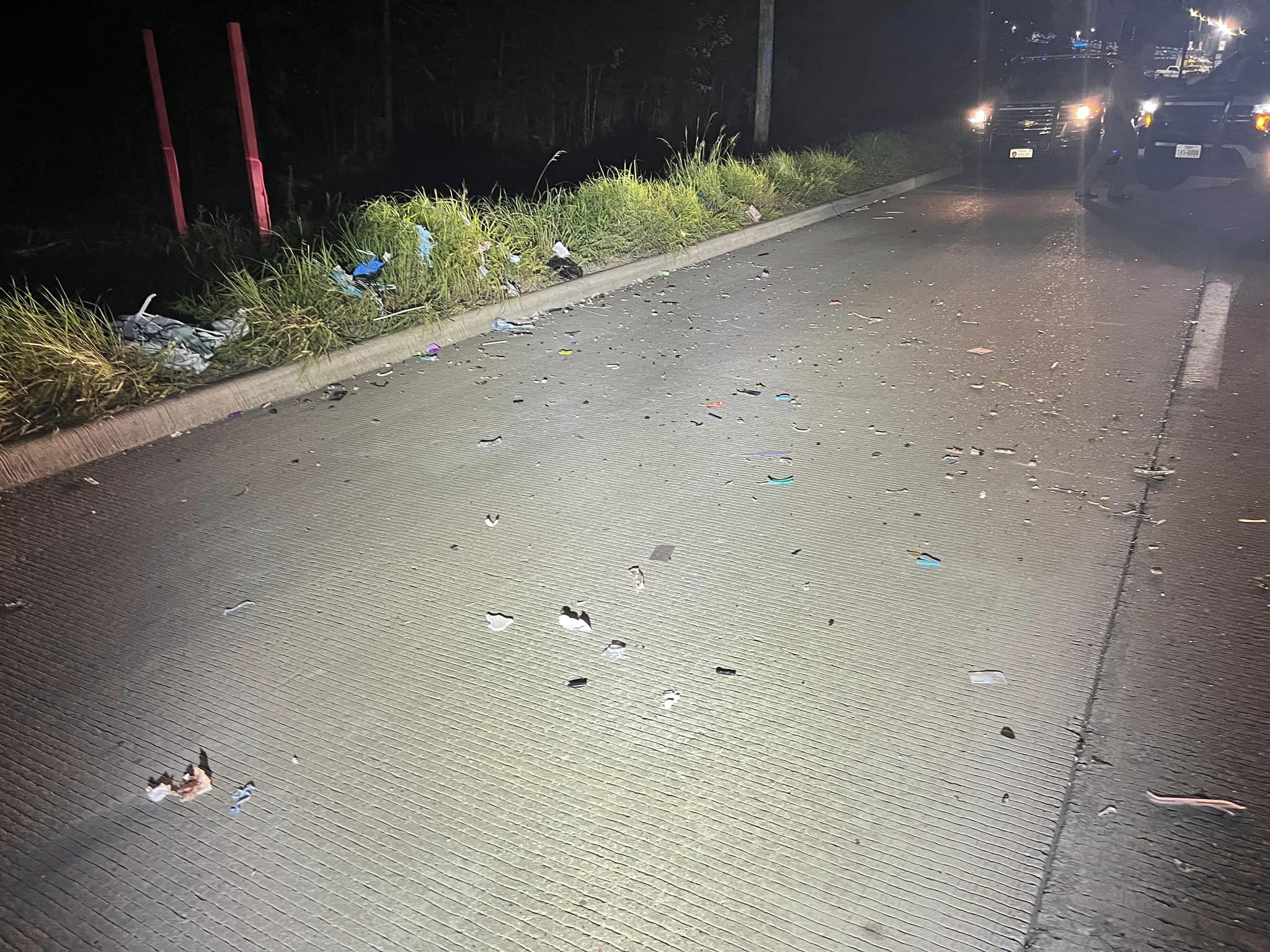 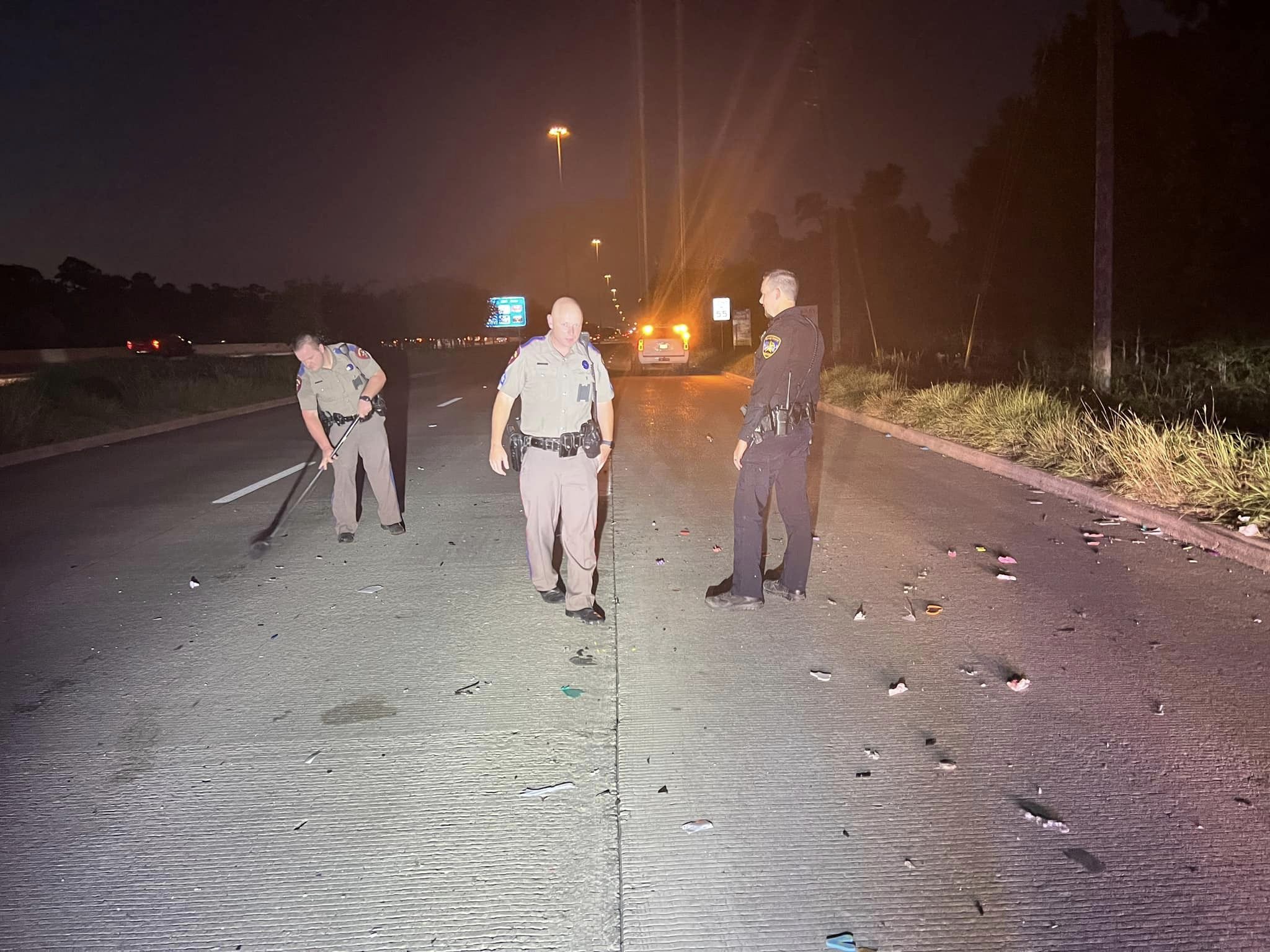 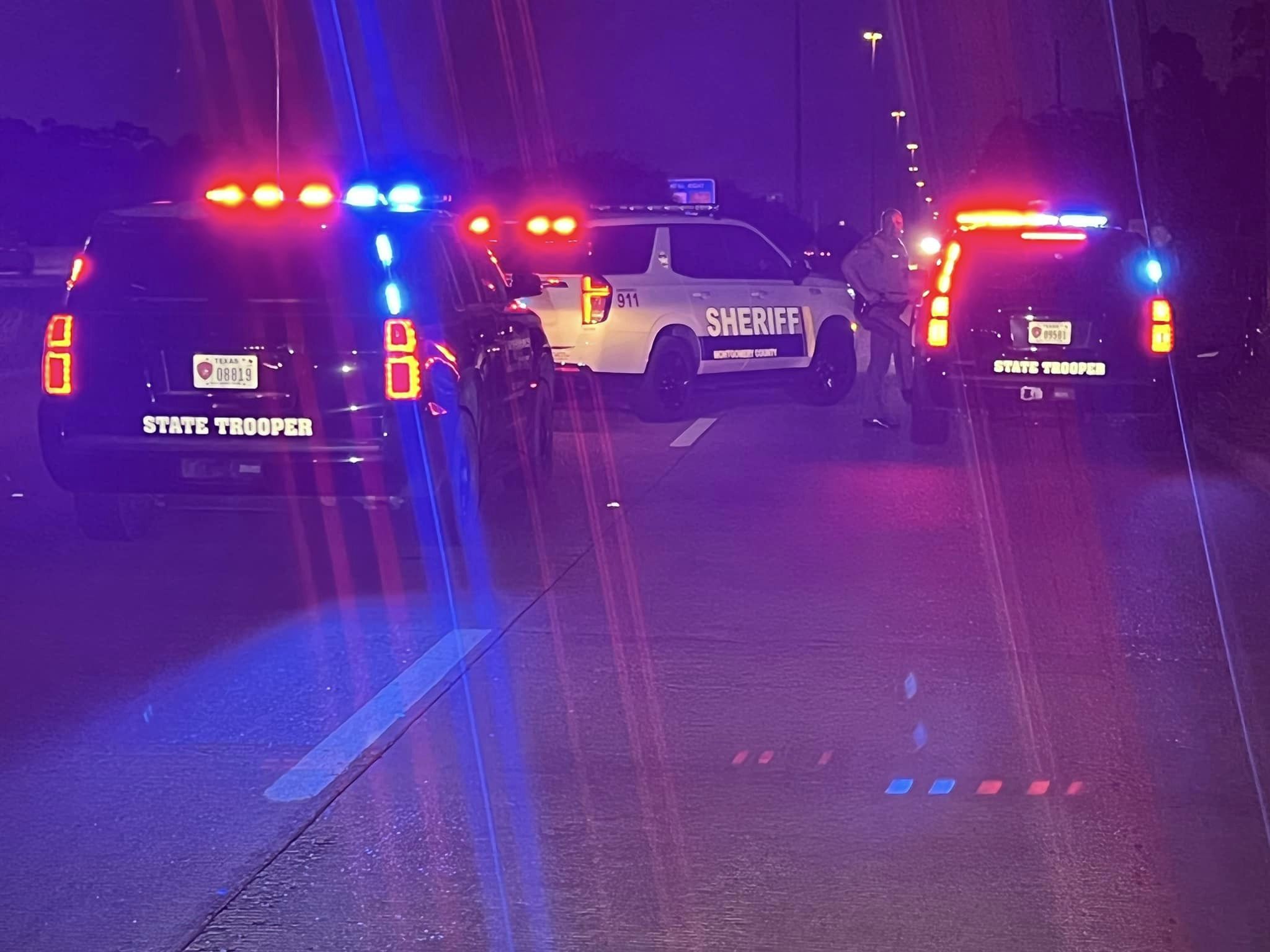 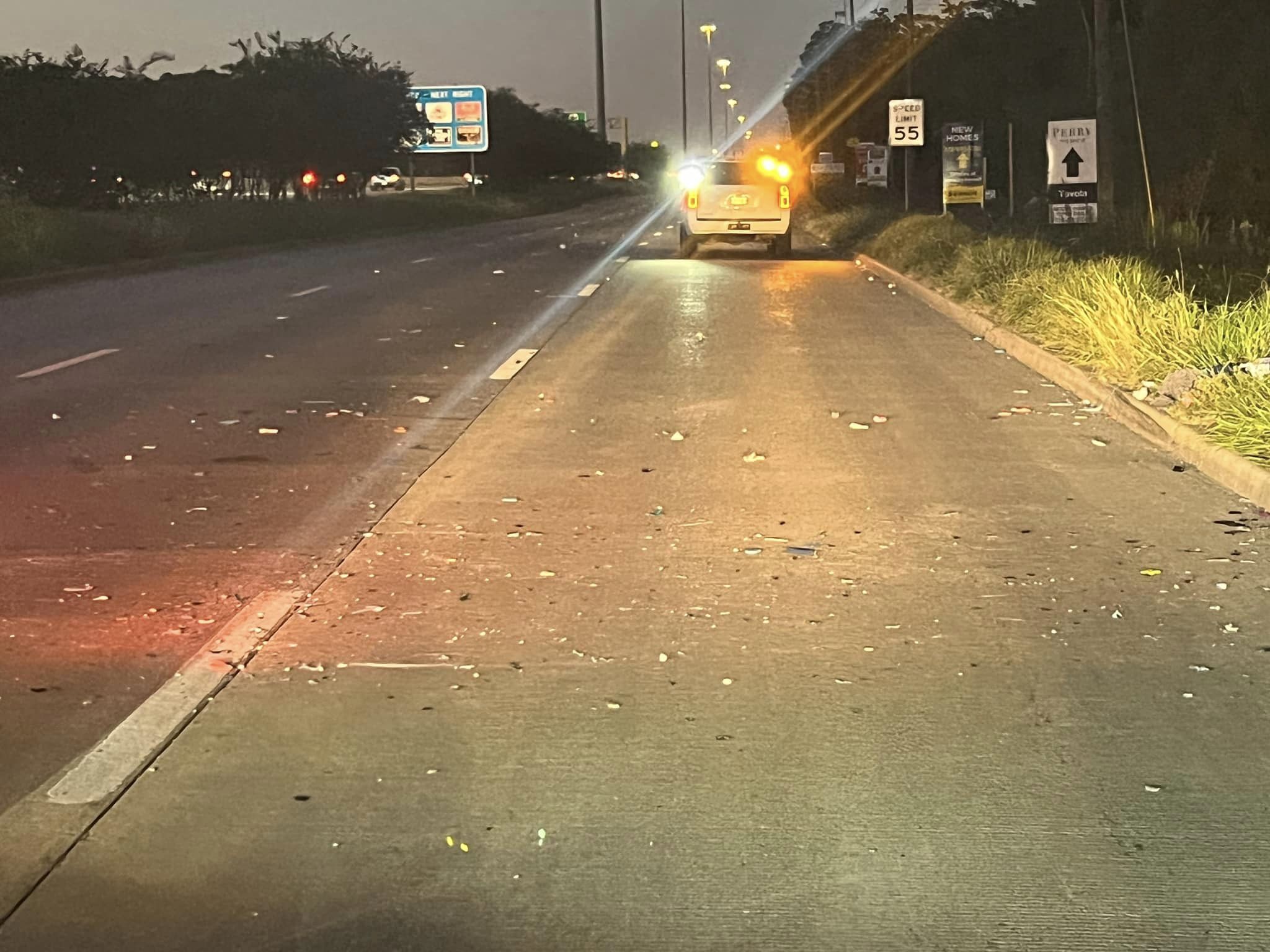 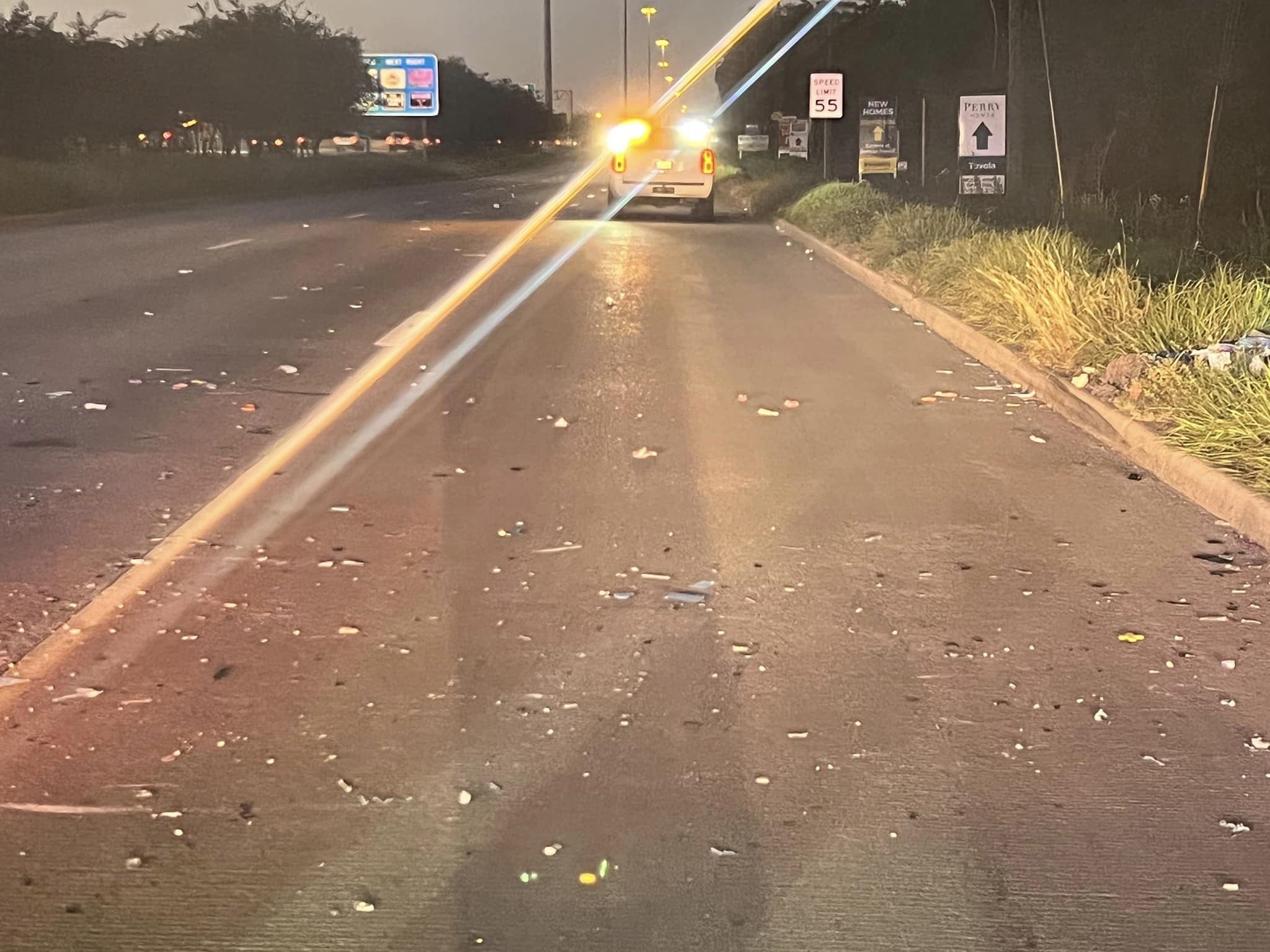 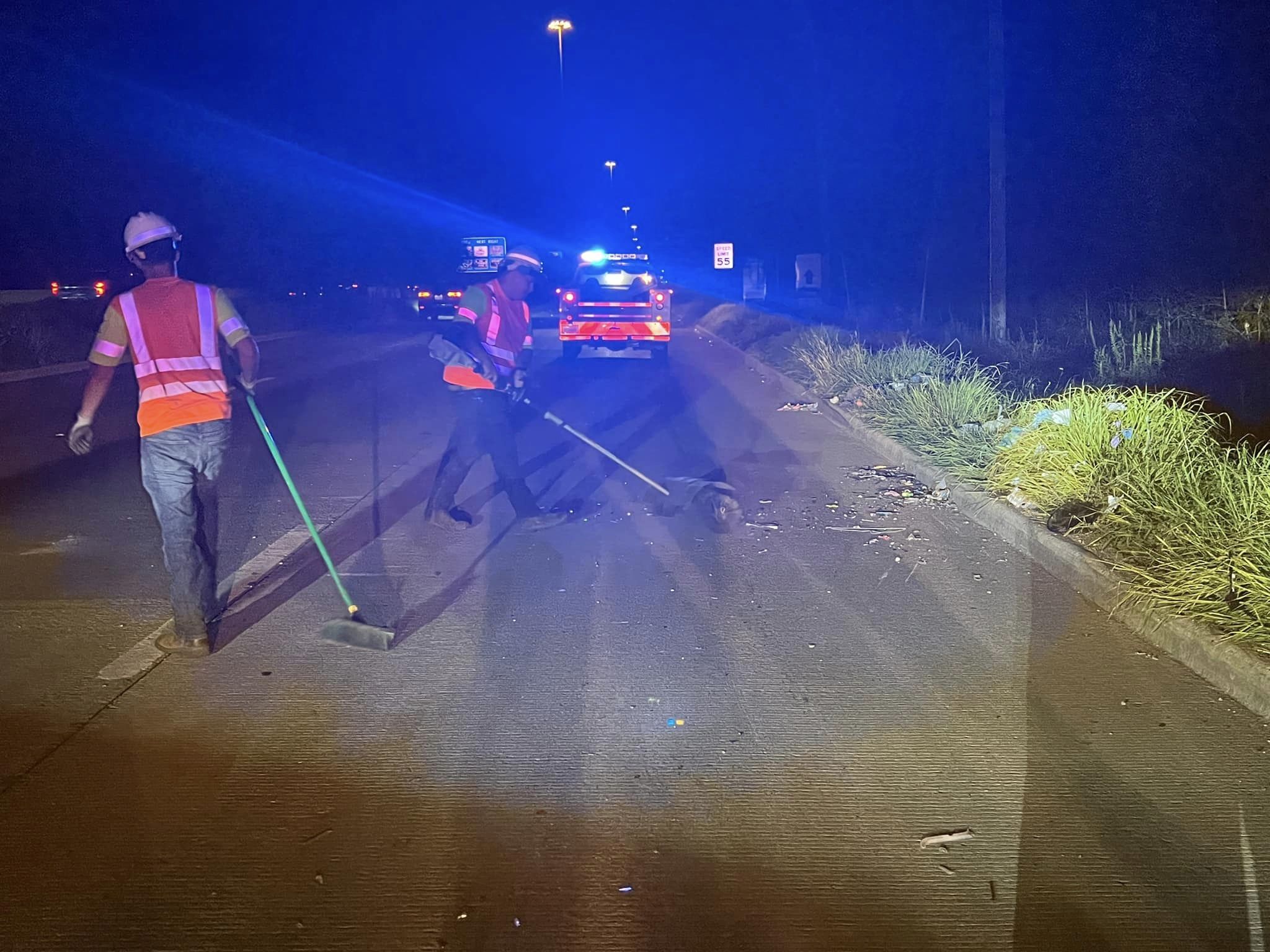 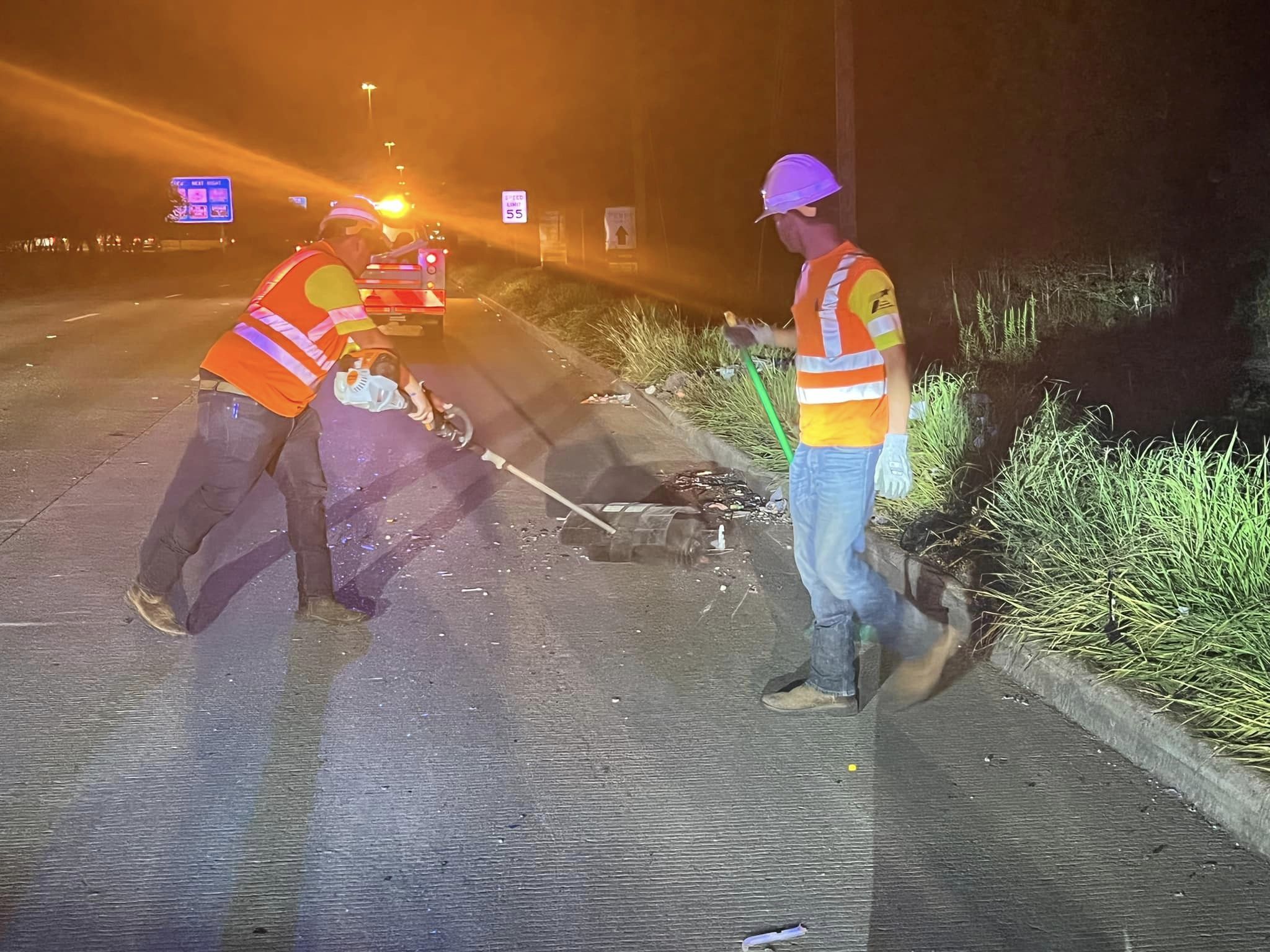