Deputy Gay was shot (7) times on a disturbance call while trying to arrest a suspect 1 month ago. He spent some time in intensive car before being released to a rehabilitation hospital where he is currently
Deputy Gay has a tough road ahead of him during his rehabilitation therapy. This incident has had a financial impact on his wife and two children, since Deputy Gay is unable to work police extra jobs due to his injuries.
The department has a BBQ Fundraiser planned for Deputy Gay on December 6, 2017, from 11am-2pm at the Enchanted Cypress Ballroom located at 12603 Louetta Road, Cypress, Texas 77429.
Citizens wishing to donate by mail may mail your contribution to 18482 Kuykendaul Road, #191, Spring, Tx 77379. Please have checks made out to Deputy Justin Gay.
Thank you for your continued prayers and support. Hope to see you TOMORROW!!!!! 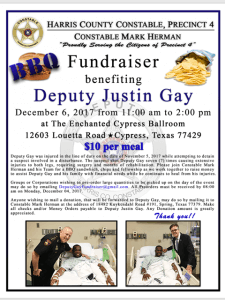