On September 27, 2012, deputies with the Harris County Sheriff’s Office were executing a felony warrant at a house in the 9700 block of Fairbanks North Houston in northwest Harris County when they came across several pounds of illegal drugs and drug paraphernalia inside the home.

When deputies entered the house they smelled a strong odor of marijuana. A search of the home revealed a scale on the floor of the living room with marijuana residue, several bags of marijuana, cocaine, and drug paraphernalia.

An assault rifle was also confiscated.

A woman inside the house was arrested and charged with Possession of Marijuana. She is identified as Ricarda Carolina Nino-Munoz (DOB 05/17/89). The subject of the arrest warrant was not located and remains at large.

In all, approximately 7 lbs. of marijuana, 3.2 lbs. of cocaine, 1.5 grams of methamphetamine, an assault rifle, and various scale 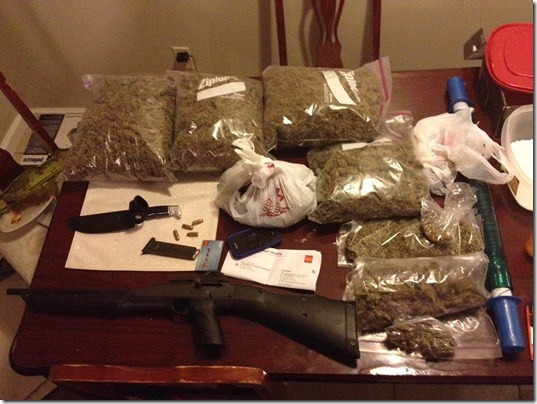