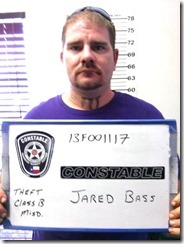 EAST COUNTY– A man committing a theft in broad daylight Wednesday was apprehended a short time later and the stolen property was returned to its owner.

On September 11, around 8:30 a.m., a Montgomery County Precinct 4 Deputy Constable responded to a call in the 22000 block of Tamesi Drive in the Riverwalk subdivision in Porter, where batteries were stolen from a backhoe. The equipment’s owner said he arrived to find a man sitting on his backhoe and when he asked the man what he was doing, the man dropped a pair of bolt cutters, walked to his car and drove away.

The equipment owner thought quickly and managed to get the vehicle’s license plate number. The deputy checked the license plate number and found the vehicle was registered to Jared Bass. The deputy recognized the suspect’s name from previous arrests. Knowing Bass lived in the Timberland subdivision, the deputy headed that direction and soon saw a car matching the description of the one registered to Bass. The vehicle’s registration was also expired. The deputy initiated a traffic stop and found Jared Bass driving the vehicle.

Bass admitted stealing the batteries to sell at a scrap yard. The equipment owner was able to retrieve his batteries, which would have cost $300 to replace.

Pct. 4 Constable Kenneth “Rowdy” Hayden said he was proud of the deputy’s efforts, as well as the theft victim.

“The reportee did an excellent job with both what he did, and did not do,” Constable Hayden said. “He did not try to apprehend the suspect himself and risk injury or worse, not knowing if the suspect was armed. He did take note of the license plate and provide it and a description of the vehicle and the suspect to the deputy.”

“The deputy immediately acted on the information and was able to take an active thief off the streets and get his full cooperation, which allowed the reportee to retrieve the stolen batteries within a short time after their theft.”

The problem has become widespread, and no one is exempt, including local logging and land clearing contractor Jamie Metts, son of Judge James Metts.

“This is an ongoing problem and it’s a frustrating one for me and everyone else who has been a victim, arriving at a jobsite early in the morning, ready to work and being unable to do so because someone would rather steal than work,” Jamie Metts said. “I truly appreciate Constable Hayden’s efforts to combat this problem and applaud their success.”

Constable Hayden said it is important for people to remain vigilant and if they witness a crime, to respond like the victim in this case, not taking the law into their own hands but taking note of as many details as possible.

Jared Allen Bass, 30, of Porter is charged with Theft.