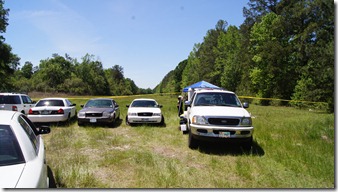 LIBERTY COUNTY: At approximately 7:30 pm last evening, Thursday, April 11th, the Sheriff’s Department received a call that “human remains” had been found along a pipeline right of way located approximately 200 yards off CR 332 about a half mile East of Hwy 59 in North West Liberty County. Capt.. Don Neyland, from the Criminal Investigation Division, along with his Investigators and patrol division responded immediately to the scene and initiated a search of the area. Acting on the information provided by the two men who were riding four wheelers on the right of way area when they discovered the remains, Investigators quickly recovered a human skull and smaller remains of an unknown victim.

Due to darkness overtaking the scene, further searching was suspended until 9:am this morning. A task force of eleven Investigators and Deputies as well as the department’s crime scene unit returned and, once again, began searching the right of way as well as surrounding wooded areas for additional remains and/or evidence. At this writing, the searchers are still in the search area and conducting further investigation.

While the scene search is continuing, the department is checking its own records of missing persons to see if there are any matching characteristics from prior cases. At a later date the recovered remains will be sent to a lab for forensic examination. Presently, there are no indications as to the sex, age or race of the skeletal remains.