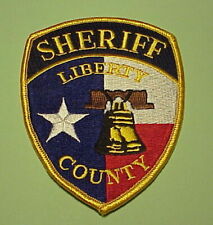 On November 26, 2022, at about 4:30 PM, an inmate was found unresponsive in his single-man cell.  EMS arrived on the scene and transported the inmate to Liberty-Dayton Emergency Room.  He was later pronounced dead by hospital staff.  The inmate had previously reported a medical condition to the jail’s medical staff.  Texas Rangers and Liberty County Sheriff’s Office Investigators are conducting the investigation.  Autopsy results are pending to determine the cause of death.