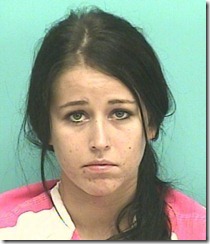 Thursday morning Judge Michael Seiler was presented with a Motion for New Trial presented by the appeals attorney for Nicole Baukus, the woman who took two lives and injured another last year in a head-on crash on I-45.

Baukus, who was convicted and given 38 years in prison last month filed the motion on several grounds. Most involved the way her court-appointed attorney Michael McDougal defended her case.

Mr. McDougal met with prosecutors on September 16th  and since he was named in the motion legally could discuss his strategy for her defense.

Her appeals attorney’s this morning filed additional documents, delaying the decision of Judge Seiler until he was able to review them. He made his decision in chambers and posted his decision just after noon.

In her motion, she makes several points against her attorney and also claims cruel and unusual punishment.

She also claims that she was denied the ineffective assistance of counsel because her plea of guilty and true to her indictment was involuntary and she was denied an impartial trial.

Mr. McDougal responded that he was appointed in January 2013 to her case and advised her to start going to the Resource Center. Both her and her father that McDougal was not approaching the case in the right way and she was not guilty because she was not driving at the time of the crash. Mr. McDougal never called Peggy Heath who operates the Recovery Center to the stand. He learned Baukus had gone to several sessions and then quit going which would not be beneficial to her defense.

She also said the voir dire of the jury panel was flawed. Mr. McDougal stated that after talking with the juror’s several thought rehabilitation was more important than punishment.

Baukus claimed she was drugged by some type of “date rape” drug which the doctor had not found in her system. Diazepam was found in her system but was ingested 20 to 24 hours before her blood was taken approximately 5 hours after the crash.

In her affidavit, Baukus refers to persons of interest. However, those persons did not give Baukus any drinks prior to midnight which was less than 5 hours from when her blood was drawn. McDougal decided to wait until the State’s toxicologist testified. When he testified that the Diazepam had been in her system at least 20 to 24 hours which agreed with the other doctor’s findings McDougal penned a note to Baukus, were dead” is what it read.

That is when on day 4 McDougal met with Baukus and her family about how the diazepam had gotten in her system, nobody had an explanation. McDougal then suggested changing her plea to “guilty” as it would possibly have a more beneficial effect on the jury than continuing with a defense that was certainly not plausible and would cause the jury to view Ms. Baukus in a harsher light.

McDougal said, “we thoroughly discussed this change of strategy and everyone, Ms Baukus and her family, were aware of the punishment possibilities that Baukus faced.”

As Prosecutor Warren Diepraam pointed out, the judge admonished Baukus and asked if she understood the ramifications of her plea after explaining them to her.

McDougal said Baukus was reluctant to testify but he put her on the stand. He felt her reasons were not validity based. Baukus told McDougal she didn’t’ want to testify because she did not want those spectators in the courtroom, including her mother and father, to see the nude pictures of her which were displayed in her phone records which the State had introduced as evidence. He felt such evidence was minimal in comparison to the effect Baukus’ testimony would have in swaying the jury to the less severe punishment.

As it turned out, everyone involved, including Baukus was satisfied that her testifying was beneficial to her case.

David Porras, the lone survivor in the vehicle Baukus hit was also in court this morning. After the judge viewed the motion and announced her would make his decision at the noon hour,

Steve Ziara, the future brother-in-law to David Porras presented a statement for the family.

This morning we attended a hearing on a motion for new trial where we learned that Nicole Baukus is seeking an appeal and a new trial after pleading guilty to Intoxication  Manslaughter in the deaths of Nicole Adams and Travis Saunders and Intoxication Assault in injuring David Porras. Ms. Baukus made the decision to drive after 21 drinks and now
that she is changing her mind on accepting responsibility we feel that it is necessary to speak up and address Ms. Baukus and her decision to proceed with an appeal.
We realize that it must be difficult for Ms. Baukus to think about spending time behind bars, but we want her to know that an appeal of her conviction will cause us to relive the stress and uncertainty that we have felt on a daily basis over the past 15 months since our nightmare began. We respect Ms. Baukus’ right to a fair trial and due process but
her actions can only be perceived as a refusal to face the consequences of her decisions.

Upon completion of the trial, we had anticipated and hoped for the healing process to begin. Our faith tells us that forgiveness is a part of that process, and while it may be difficult to imagine right now, we believe that given the chance, forgiveness can occur. However, the
The possibility of another trial will force all those affected by Nicole’s decision to drink and drive to re-live the horrific details of the accident that changed our lives forever.
We respect the laws and judicial system of the State of Texas, and we will not oppose or protest due process, which is a right of all citizens of this great state and our great nation. Nor will we suggest punishments in excess of those clearly outlined in the Texas Penal Code. We have faith that justice will eventually prevail, but in the meantime, we are left
with no choice but to ask that Nicole Baukus take responsibility for the pain and suffering she has caused and abandon her plans to move forward with an appeal.
We would like to invite anyone that wishes to honor Nicole Adams and Travis Saunders memory or show support for our family to attend the Walk like MADD event at North Shore Park in The Woodlands on October 5th at 8 am.

Fred Saunders, father of Travis Saunders who was killed in the crash was also in the courtroom this morning. He said the first trial was the most emotionally draining thing that has happened since the accident. He said it was just like going through it all over again. He said, “now she is filing an appeal and everyone is throwing their hands in the air again.” He did say there is due process in this country and you do have a right to an appeal.  But he believes morally he does not have a right to an appeal. Especially after what has happened and the evidence she had seen. In addition to the pain, she saw in every family member and friend that were affected by the case.

He said the healing process has turned from despair to anger. Saunders said he feels everyone in the family wants her to accept her punishment and the fact that she didn’t get the maximum and to go ahead and try her own healing. “She needs to get some forgiveness from the Almighty and she needs to seek out forgiveness from these families.”

As Fred Saunders stood reading the judges decision he said, “that’s pretty awesome, that’s very awesome. I’m going to FaceBook this thing and let everyone know the judge did the right thing.” 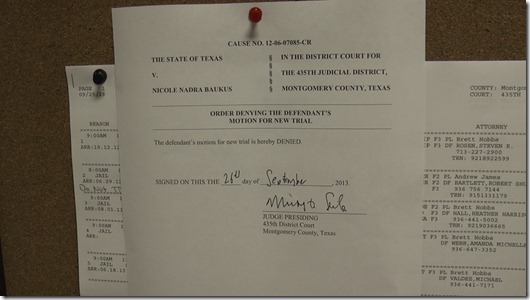