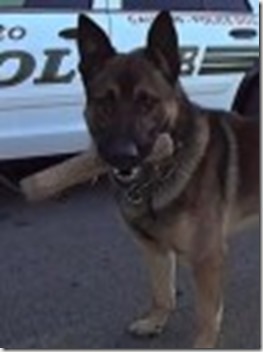 K9 Sultan was shot and killed while attempting to apprehend an armed felon in the area of San Jacinto Street and Mayberry Avenue in Hemet, California.
Sultan had tracked the man underneath a house where he was shot. His handler immediately transported him to an animal hospital where he was pronounced dead.
The subject barricaded himself inside a home and remains at large.
K9 Sultan was a narcotics and tracking canine. He had served with the San Jacinto Police Department, which contracts police service from the Riverside County, California Sheriff’s Department, for two years.

Condolences may be sent to: