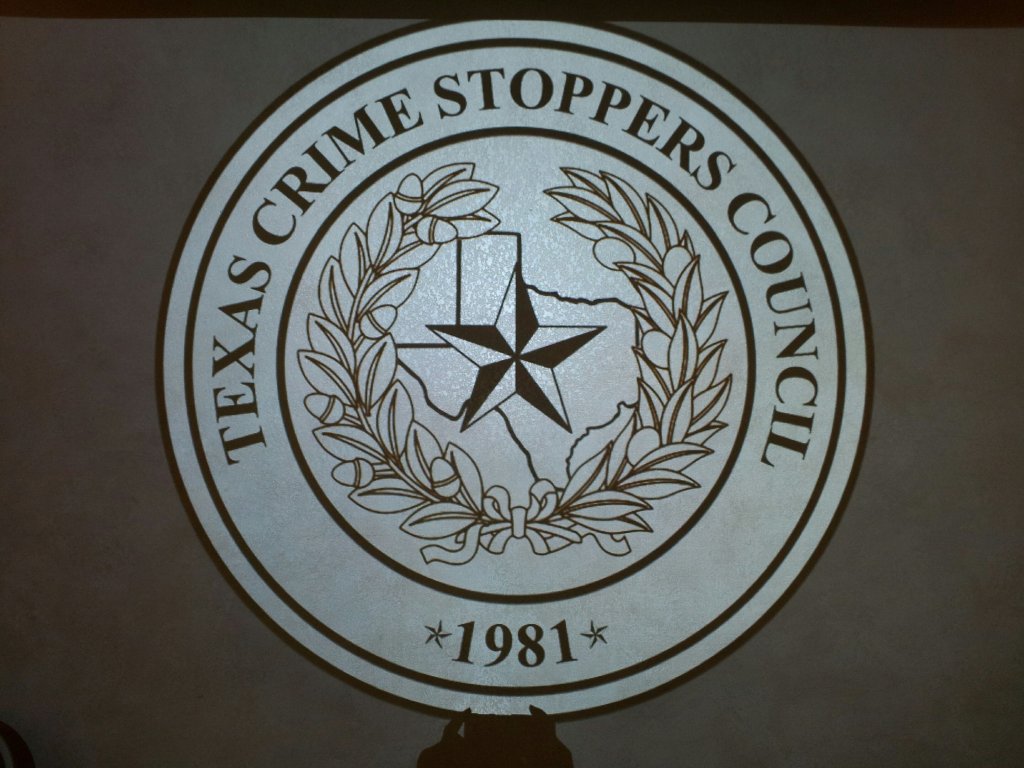 If one is not familiar with the Crime Stopper program, one may ask “ What is Crime Stoppers and what do they do.” ? As strange as it may seem this is not an unusual question for many people to ask even though the program has been in operation and going nationwide since its inception in the 1970’s with over 200 such programs in Texas, alone. Quite simply put Crime Stoppers exist to generate anonymous “tips” that assist in solving crimes and the anonymous tipster can be awarded cash money for their information. The State Crime Stoppers Council of Texas sponsored a sixteen hour training class on May 4th and 5th  where Board Members and Coordinators from all across the state attended to not only full fill the required training for this cycle but also to be updated on the most current “stats” for the Texas Crime Stoppers Program. Included in this training were Liberty County Sheriff’s Chaplain Ken Smith who serves as a board member, Capt. Ken DeFoor who is the Liberty County Crime Stopper Coordinator and Forensic Investigator Vita O’Reilly who serves as the Deputy Coordinator. Texas Commission On Law Enforcement ( TCOLE ) credits were given to all those Peace Officers who were in attendance and there were many from across our great state.

Contrary to what the general public might think, all Crime Stopper programs are private organizations and not law enforcement programs therefore all Crime Stopper records belong to Crime Stoppers and not the law enforcement agency. As such and because the entire program is based on the anonymity of the “tipster” and because when the caller calls the civilian contract “tip line” all transactions are carried out with a code number and a pass word and not a person’s name or phone number, that tipster cannot ever receive a subpoena to appear in court because nobody knows the actual identity of the caller. Section 414 of the Texas Government Code provided the legal protection for all tip records. The cash reward is based upon a point system and can range up to a $5,000 award for a capital offense.

So, one might ask how is the Crime Stopper program supported and how effective is the program ? Being a 501 © (3) organization all the Crime Stopper programs   across the United States are supported by donations as they receive no state or federal financial support whatsoever. The programs primarily depends upon the probation fees from court convictions thereby, in effect, having the guilty offenders of various crimes pay for a program that helps to get other offenders off the streets to answer for their crimes against the community. Other fund raising projects such as golf tournaments, clay shoots and private donations from corporations help sustain these very worthwhile programs across our nation. Enough cannot be said to commend the private citizens who sits on these board of directors and donate their volunteer time and talents to this organizations that helps the communities they serve and at the same time work “behind the scenes” and are very rarely recognized for all their good work. As of three years ago, every Police Department, Constables Office and, of course, the Sheriff’s Office has been a member of the “Multi-County” Crime Stopper Program along with Montgomery and San Jacinto Counties and as such, can request our local Crime Stopper program to publicize their respective felony cases in an effort to clear many of their unsolved cases..

The statistics from the past year of 2016 speaks for itself when we see how effective Crime Stoppers is across Texas when we look at it by the numbers. There have been approximately 5,000 suspects arrested across Texas through anonymous tips resulting from 70,000 anonymous tips received. This has amounted to $1.2 million in rewards paid to those tipsters. As a result of these arrest in 2016, 35 million dollars of narcotics were seized, 30 fugitives and sex offenders captured and taken off the street, 97 stolen guns recovered, 42 stolen cars recovered and overall $2.8 million in the total  value of property recovered by law enforcement. All these and other such cases have resulted in 3.7 thousand offenses being cleared saving the tax payer dollars and law enforcement time and manpower.

A very similar “Campus Program” is in existence in many schools in Texas also with very impressive statistics, Over 2 thousand tips were received in 2016 from school children that resulted in 111 weapons recovered from students, over 12 thousand dollars in illegal drugs seized and $751 thousand dollars in recovered property. Over $50,000 in rewards to anonymous tipsters was paid out. So, is the Crime Stopper program effective ? The statistics alone says that it is but the program can only remain effective and viable if it is supported by the community it  serves. Actually, many tipsters tells the Crime Stopper operator they do not care about the reward, they just want to help get a criminal off the streets. It is only through such civic minded citizens as this or those motivated by the reward itself that Crime Stoppers can continue serving the public as it was designed to do. Liberty County Sheriff Bobby Rader strongly supports the local Crime Stopper program and ask any citizen who may information on any criminal offense to call the Multi-County Crime Stopper number at 1-800-392-7867 and provide the critical information that might clear many of our local county cases.