Thursday was spent by 5 deputies from the Waller County Sheriff’s Office and 2 Waller County District Attorney’s Office Investigators on Highway 6 and Highway 290. Thier mission to enforce the slow down and move over law. More than half of the vehicle spotted failed to either slow down or move over. Of those 75 were stopped. Sixty warnings were issued and fifteen citations were issued. One person was arrested for no drivers license or insurance. His vehicle was towed. Many people stopped said they forgot about the law or they did not know about it.

During the 2011 Legislative session, tow trucks were added to the existing law, which already applied to police, fire, and EMS vehicles stopped on the side of the road with emergency lights activated. Motorists are required to vacate the lane closest to the stopped vehicle (if there is more than one available lane in the same direction of travel) or slow to 20 miles below the speed limit.

The law was passed in the Texas Legislature and went into effect Sept. 1, 2003.

“This law is about providing extra protection for those individuals on the side of the road doing their jobs, as well as the people on the roadside with them,” said DPS Director Steven McCraw. “Thanks to this new provision, tow truck drivers, who are usually helping motorists in distress, now have additional protection under the law so they can do their jobs in a safer environment.”

“In 2011, the Texas Legislature amended the Move Over/Slow Down law to now require motorists to slow down or move over when passing a tow truck displaying emergency lights,” said Carol Rawson, TxDOT Traffic Operations director. “At TxDOT, we believe this is an important step toward improving safety for all emergency personnel, including tow truck operators, who routinely work in dangerous conditions along Texas highways.”

DPS issued more than 17,000 warning and citations last year for violation of the Move Over/Slow Down law and another 6,000 through the first five months of this year.  Violation of this law could result in fines up to $200. The punishment is more severe if there is property damage, and jail time is possible if someone is injured.

Sean Whittmore, Assistant District Attorney for Waller County said by drivers not moving over they are putting the officers, firefighters , wreaker drivers or construction workers in jeopardy.  Nationally, according to the FBI from 2005 to 2014 there were 97 officer fatalities due to motorists striking them on the side of the road. Twelve of those were right here in Texas. This does’t include wrecker drivers or other workers. 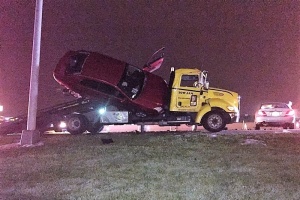 A tow truck driver named Josafath Cordova, 23 years old, was badly injured last week in Plano after he was hit by a driver who then fled the scene. Police said that this happened on Wednesday night, March 23, 2016 around 11:30 p.m.

Cordova, who was working for Tow Jam Wreckers at the time, was using his tow truck that night to help a disabled car along Highway 75.

As he was working the levers on the side of the tow truck, it looks like a silver Mitsubishi came along the scene and apparently veered out of its lane, hitting the disabled car, Josafath Cordova, and the tow truck before rolling over onto the shoulder.

Mr. Cordova was badly injured and had to be rushed to the hospital in serious condition. The Mitsubishi’s driver, according to witnesses, was a man. He apparently got out of his Mitsubishi, relatively unharmed, and asked Cordova if he was ok, then fled the scene on foot when bystanders mentioned calling the police.

Last December, DPS Trooper Castleschouldt who is assigned to Montgomery County had just finished a traffic stop on Interstate 45 northbound at North Loop 336 in Conroe. As he was returning to his vehicle he observed a white van driving at a high rate of speed partially on the shoulder and partially in the lane. He attempted to get the drivers attention with his flashlight and began to run toward the feeder. As he crossed the feeder the van which was loaded with lumber struck the back of the patrol car and flipped end over end striking the vehicle that the Trooper had stopped. Five people including children were in the Nissan SUV when it was struck, all five were transported to Conroe Regional Hospital but only two required treatment for minor injuries.Trooper Castleschouldt said before the dust even settled motorists were stopping to check and make sure the Trooper was not injured. The driver of the van was taken into custody for possible DWI.
THe rear of the patrol car was pushed to the head rests of the front seat. A Milsteadt wrecker using his cable was able to pull the trunk area open so the Trooper could retrieve his equipment. Both his long weapons were damaged, his computer screen was shattered even his Streamlight flashlight was bent.
Trooper Castleschouldt completed a tour in Iraq in the US Army then returned to the states and was assigned to DPS Waller County. While in Waller County a motorist driving to fast for conditions  came around a curve on a FM road and his Trooper Castleschouldt head on. He transferred to Montgomery County and then the incident tonight.
Trooper Castleschouldt was able to return home to his wife and child.
Texas Law states if a motorist approaches a police vehicle, wrecker, or TXDOT vehicle in a lane with lights activated, the motorist must vacate the lane next to the vehicle or slow to 20 mph below the speed limit. The driver hasn’t been found yet, but the police said they traced the Mitsubishi to a woman who claims the car was stolen from her.

On April 7th, 2016 deputies with Constable Mark Herman’s Office responded to the 4900 block of the North Beltway 8 in reference to an accident where a vehicle had struck a Precinct 4 patrol car and then fled the scene. On deputies’ arrival, the deputy whose vehicle was struck stated that he was stopped on the shoulder of the roadway when a truck struck his fully marked patrol car and then fled the scene. The deputy pursued the suspect vehicle until it stopped approximately ¾ of a mile from the accident scene. The driver hasn’t been found yet, but the police said they traced the Mitsubishi to a woman who claims the car was stolen from her.