The Liberty County Sheriff’s Office is asking the public’s help in locating JAMES RODNEY BURNETT (WM) DOB 9-13-1979, who is described as 6 feet tall, 250 lbs, brown hair, brown eyes with several tattoos on hands, both arms and body. James Burnett is a parole violator and is also wanted on two outstanding warrants out of Liberty County. One for “Theft of a Firearm” and a second for “Unlawful Possession of a Firearm by a Felon”. The firearm is described by Sheriff’s Deputy James McQueen Jr. as a .45 caliber 1911 Desert Eagle semi-automatic pistol.

Burnett has a rather lengthy criminal record and is described as “homeless” but seems to frequent the Hardin, Texas area of East Liberty County although he is reported to travel throughout the county.

Anyone having any information on the whereabouts of James Rodney Burnett is ask to call the Liberty County Sheriff’s Office at (936)336-4500 or Crime Stoppers at 1-800-392- STOP (7867). Any information given through Crime Stoppers will remain confidential and can yield a cash reward. 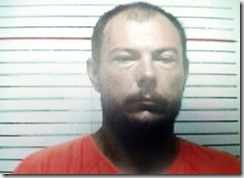