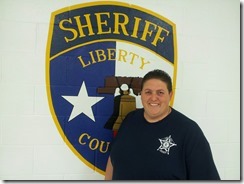 The Liberty County Sheriff’s Office Selection Committee under Sheriff Bobby Rader has, once again, selected one of those “civilian” employees who works quietly behind the scenes and is rarely seen by the general public but is so vital to the successful operation of court case due to the  large amount of evidence that flows through the Sheriff’s Office into the District and County Courts of our community. Peggy Bourgeois was nominated and selected as the “Employee of the Month” for December and is the sole Technician of the Sheriff’s evidence and property room. In this position, Peggy works her magic in receiving, tagging and storing evidence from criminal cases that will later, in many cases, determine the outcome of trials in our courts of law. This is an assignment that not only requires a dedication to detail but a very high standard of ethics and a keen knowledge of the law on what and how evidence and recovered property is preserved not only for the courts but for the citizens who may have had their property recovered and stored at the Sheriff’s Office. These are personality traits that Peggy Bourgeois has in abundance.

In interviewing Peggy, she said that in her pre-Sheriff’s Office life, she owned her own 1950’s style restaurant and later moved into working at a local City of Liberty Gym where she met a couple of Liberty County Deputies who convinced her she should apply with the agency and become a dispatcher. That was thirteen years ago and according to Peggy, this was the best decision she could have ever made. While with the agency she has progressed through the dispatchers office to the Bonding Office then through the Records Division and finally as the Evidence Technician of which she now holds an Intermediate rating and is working hard towards her Advanced certification. Peggy has attended and completed the International Association of Property & Evidence class as well as the Texas Association of Property Evidence Technician school. As a result of these various moves and training schools she has gained a great deal of knowledge in the operations of the Sheriff’s Office.

One of Peggy’s greatest love is the fact that she has served as Foster parents to thirty-six children since 2013 and has adopted five of those children which now takes up much of her time with school and church activities. This resulted in the winning the Texas “Foster Parent of the Year” award in 2012 which only shows the compassion Peggy has in her heart not only for her job but for family as well.

Much of Peggy’s wishes for the future of the Sheriff’s Office mirrors what most of the past employees of the month have mentioned and that is their wish for additional personnel so response time to calls for service could be shortened. But also as important is her wish that one day there will be additional storage space for the growing amount of evidence and property that comes into her office and a modern up to date cataloging system that would track all such items in a fashion that would make inventory much easier and more efficient. She stresses that she loves the work that she is presently doing and that her wish is to continue in this same career field so she has the opportunity to improve in her abilities and help the agency continue to maintain the high standards that presently exist in her office.

Peggy Bourgeois is the type employee that is so critical to the successful operation of the Sheriff’s Office in general and to the evidence and property room operation specifically and it is for this reason that we all “tip our hats” of appreciation to Ms. Peggy Bourgeois for being the “Employee of the Month” for December, 2016.