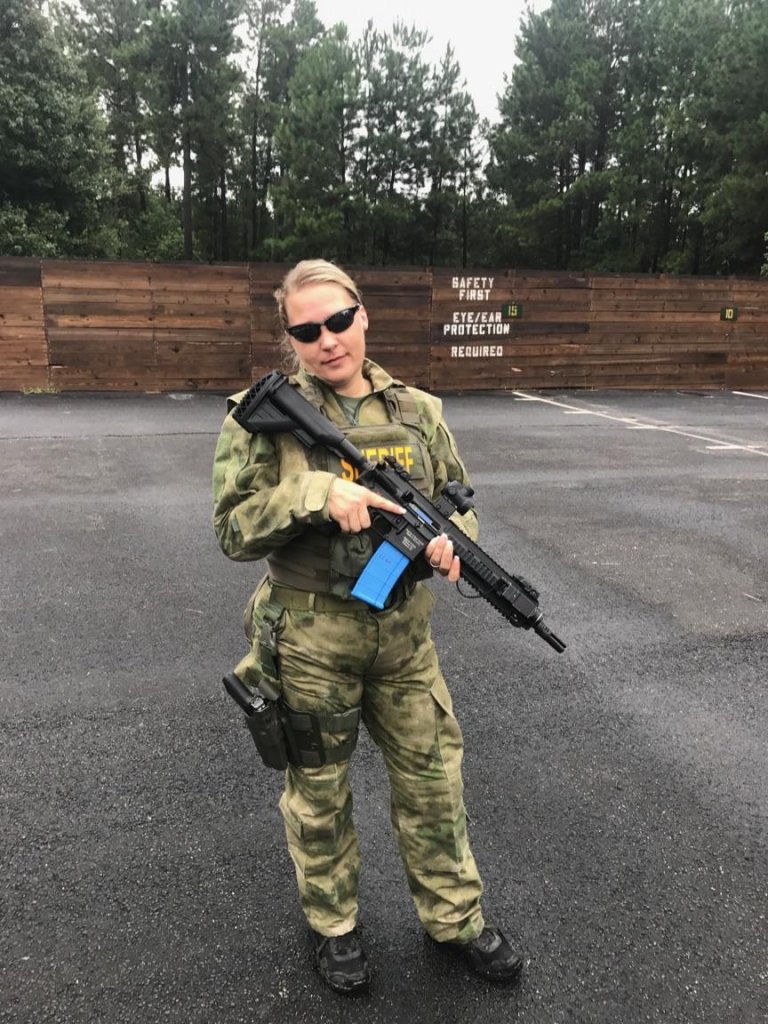 Liberty County Sheriff Bobby Rader said that after a very grueling and physically demanding process, Deputy Shelly Edwards completed an extensive list of qualification requirements to become the Sheriff’s Office first and only female S.W.A.T Officer ever to hold that prestigious and hard earned position. It was not an easy road for Edwards who gives credit to pure determination, hard work and “don’t stop trying” attitude. Was there ever a doubt or a bit of hesitation on her part to undertake this apparently impossible task ? Well, to be perfectly honest, Edwards said, the first day of physical training she sat and watched her male counterparts running, crawling, climbing walls and firing on the gun range and her first thoughts were, “ … why am I here. I can’t do all that..”. But that first knee jerk reaction was only present for a few brief moments as her inborn “never quit” attitude took over with full determination and grit to be the best she could be and earn a place on the S.W.A.T organization. The rest, as is said, is history as is shown by her above average firing range abilities and physical stamina. All of her demonstrated abilities have allowed her full acceptance into the S.W.A.T unit by her male co-workers and, as Edwards put it, “ just one of the guys” and a title she said she proudly wears.

Captain Billy Knox, Commander of the S.W.A.T unit said that no special treatment was given to Dep. Edwards as she had to prove herself by doing and performing the exact and same requirements that the male deputies had to do to qualify for this specialized unit. Capt. Knox goes on to say he feels that Edwards should be commended for her tenacity as she did not ask for nor expect any special treatment during the training phase which was difficult even for the seasoned S.W.A.T deputies. Deputy Edwards is no stranger to law enforcement as she graduated from the Houston Community College Police Academy in November of 2010 and has worked as a dispatcher for the Dayton Police Department, as well as a Reserve for the Pct. 4 Constables Office. Edwards said that her years as a dispatcher quickly convinced her she needed to be working on the other side of the radio as her heart and soul longed to be a Peace Officer. She has been with the Liberty County Sheriff’s Office for two years and has only a short ways to go to obtain her Advanced classification in law enforcement. In addition Edwards holds an Associate Degree in Criminal Justice  and a Minor in Juvenile Studies. Her long term goals are to someday work as a Forensic Technician and with over 1000 hours of various police classes to her credit and her determination, there is no doubt that one day she will accomplish that goal as well. Dep. Edwards said she does not really connect her being the first female S.W.A.T. Officer to any kind of special category other than just wanting to be a part of a specialized unit with a sincere desire to help the Sheriff’s Office and be a worthwhile member to her fellow team members. It is felt by all who know Deputy Edwards that she has certainly accomplished that objective.