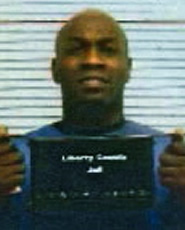 The District Courts of Liberty County once again showed violent criminals will not be shown mercy. This story begins on December 9, 2012 when Muhammad Aqeel was closing his Exxon gas station at the corner of Bowie and Highway 90 In Liberty. Joseph Alridge, 34, of Liberty, lurked outside awaiting his chance to attack. When Aqeel opened to door to his car, Alridge, with a shirt covering his face, attacked him with a tire tool. Alridge struck Aqeel numerous times in the head and face while taking the daily deposit from the store owner in addition to his wallet and vehicle. The car was quickly found a short distance away by members of the Liberty Police Department with the assistance of the Liberty County Sheriffs Office. Numerous items were collected for laboratory analysis. Surveillance video from the store showed Alridge as the last customer of the night clothed similarly to the attacker. A car Alridge frequently used was searched but nothing of evidentiary value was found. What was missing however was of great value: a tire tool that matched the size of the one left at the scene. After years of waiting because of evidentiary backlogs and laboratory delays, the results of the tests were in: the DNA of Alridge and Aqeel were on the shirt left at the scene. The evidence was presented in court over 3 days after jury selection was completed Monday. The defendant’s attorney, Keaton Kirkwood, took great care in describing the lack of the defendants DNA on anything other than the shirt. He elicited testimony from officers pointing out the lack of in car videos depicting the after effects of the attack and blamed the lengthy delays in the process on the State. The State, through Assistant District Attorney Ragis Fontenot, countered that nothing about the lack of videos or delay has any effect on the actual horrific events of the day. He also pointed out that Aqeel identified his attacker in Court without hesitation and how the only reasonable explanation for all the evidence against Alridge was that he was guilty. The jury, after an hour of deliberation, rejected the defense’s claims and found Alridge guilty. The defendant elected for District Judge Mark Morefield to assess his sentence. The State presented evidence of Alridge’s prior convictions for aggravated robbery, assault on a prison guard, assault on a family member and other misdemeanor charges. Judge Morefield, after hearing all this, sentenced Aldridge to life in prison. He will Be eligible for parole when he has served 30 years.

District Attorney Logan Pickett said “People like Joseph Alridge who rob, steal, and beat other people are exactly the kind of people the District Attorney’s Office seeks to remove from free society. We will continue to prosecute violent offenders like him and ask judges and juries to send them away for as long as they can. We truly appreciate the hard work of the Liberty Police Department in working the case, the jury’s time and consideration of the evidence and the just punishment handed down by Judge Morefield.”