At 7:46 am Wednesday,  March 23, 2022,  an AT+T Cable Splicer on his way to the job site was traveling north on SH 249 feeder directly under 249 Toll Road when he spotted a crashed car on the opposite side of the concrete barrier, between the road and the railroad tracks. He stopped and discovered a female who had been ejected from the vehicle almost one-hundred feet away from it. She appeared deceased.  Magnolia Fire and MCHD responded to the scene. MCHD Medics determined the 32-year-old female was deceased. DPS responded to the scene to investigate. Finding some clothes and other items consistent with a small child a complete search was done of the area to make sure there were no other victims. According to DPS, the driver was northbound on SH 249 when she entered the curve, hit the curb and guardrail, and began to flip.  It is unknown how long she had been there before being discovered. ASK Towing removed the vehicle from the scene. Eickenhorst Funeral Directors transported the victim to the Montgomery County Forensic Center for autopsy.

The female has been identified as Brittany A. Montealvo, 32, of Magnolia.

Brittany Angel Montealvo went home to be with the Lord on March 23, 2022, at the age of 32. She was born on March 3, 1990, to Paul and Shannon Montealvo in Galveston, Tx. She is preceded in death by her great-grandmother Verna Mae Dudley, her great Grandma Teresa Reyes, her Mammaw Martha Pearson, aunt Cheryl Tristan and uncle and aunt Richard and Gwen Dudley
Brittany was a beautiful, fun-loving soul who always took care of others. She was an amazing mother who loves her kids unconditionally. She could pull you from a dark place and help you see the light of life again. She was the kind of person who always had a smile on her face and could light up a room just by entering it. She loved to help others and was always just a phone call away.
Brittany is survived by her father and mother, Paul and Shannon Montealvo, her daughters Vanessa and Ciaira Perez and Julia Holt, her grandparents Ruth and Johnny Hentschel, Cindy and Stan Hooks, and Gilbert and Ursula Reyes her sister Kristine McInnis and her brother Paul Montealvo and companion Maddie Bordwine, her aunt and Uncles Kasi McCain, Kari Morgan and husband Jimmy Morgan, Martha Daniels and husband Darren Daniels her uncle Gilbert Reyes and her uncle and Aunt John and Blanca Montealvo As well as many nieces, nephews and cousins and friends. Baby girl fly high with the angels you are so missed.
GOFUNDME FOR BRITTANY MONTEALVO 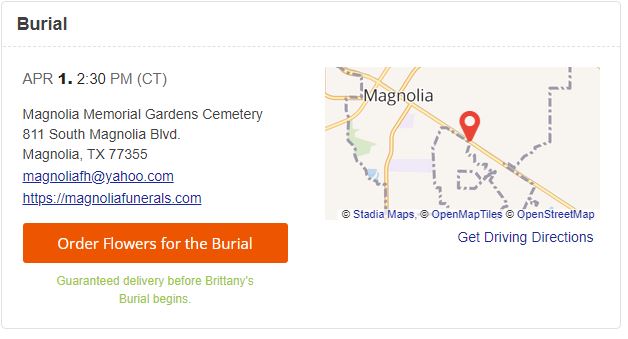