Mattel’s Fisher Price announced four recalls this morning for more than 11 million toys and children’s products sold since the 1990’s. This after several reported injuries and safety concerns.

Baby Playzone, Crawl and Cruise Playground, Crawl and Slide Arcade, Play Wall Ocean Wonders, Kick and Crawl, Bat and Score Goal These involve 2.8 million in the US and 125,000 in Canada. It is reported the valve of the inflatable ball come off and pose as a choking hazard. There have been 46 reports with them coming off in the US. Of these 14 were found in the child’s mouth and 3 where the child started choking.

About 950,000 Healthy Care, Easy Clean and Close to Me High Chairs in the US and 125,000 in Canada have been recalled where children can fall against the pegs on the rear legs causing injuries. These are units made before 2006. 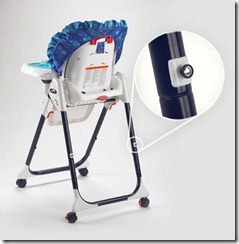 Little People Wheelies Stand and Play Rampway. Over 100,00 in the US and 20,000 in Canada have been recalled. These units were sold between April and September of this year. The recall involves model numbers T4261 and V6378. They were sold with small cars that a child can push down winding ramps. Only the purple and the green cars that are marked "Mexico" and do not have a yellow dot on the bottom are included in the recall. The toy is intended for children 1 1/2to 5 years of age. 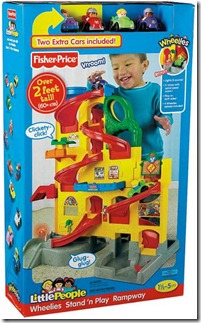 Fisher Price Trikes and Tough Trikes toddler tricycles.  Almost 7 million units are involved from the US. This recall involves the Fisher-Price Trikes and Tough Trikes toddler tricycles with model numbers listed in the chart below and that have either a disc-shaped or D-shaped pretend key. The model numbers are located under the seat in the storage compartment. The trikes are intended for children 2 to 5 years of age. The pretend keys are located about 3 inches in front of the seat and protrude at least 5/8 inches above the trike’s body. The trikes manufactured after June 16, 2010 are not included in this recall. These trikes have a modified key in a flattened D shape (see picture below) and a manufacturer run number higher than 1670Q2. The run number indicates the trike was manufactured on the 167th day of 2010 or on June 16, 2010. The run number is found under the seat below the model number. 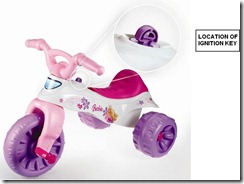 For additional information, contact Fisher-Price at (800) 432-5437 between 9 a.m. and 6 p.m. ET Monday through Friday or visit the firm’s website at www.service.mattel.com