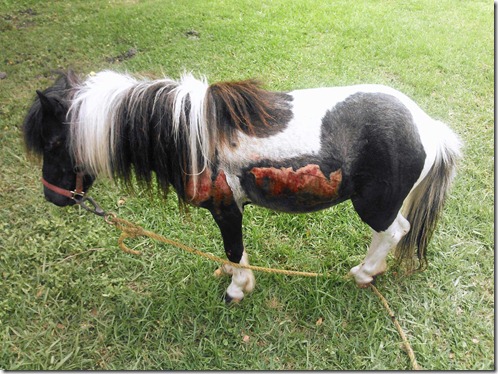 At approximately 10:15 a.m. today, the Liberty County Sheriff’s Department received a call from a citizen who witnessed a man dragging a small black and white Shetland Pony behind his vehicle on CR 6021. The witness said that each time the little horse stumbled and fell on the road surface, the owner would get out and beat the small horse across the head with a belt and buckle. Then he would get back in his truck and drag the horse again.

Deputies Gorden Bean and Robert Dunn, along with Sgt. James Sprayberry responded to the scene and located the horse’s owner 68 year-old, Francisco Castillo Cruz, at his residence at just outside the city of Dayton, Texas. Deputy Bean asked to inspect the horse and found that much of the hair and skin on the left side of the animal had been dragged off by the rough road surface. There was also physical damage to the hoofs and the left eye had severe damage from being repeatedly struck with a belt. Deputy Bean said there is a possibility the Shetland Pony may lose the left eye due to the injury.

The only reason that Cruz gave for abusing the Shetland pony was the fact that he was “mad” because the horse managed to get out of his stall and wander off his property.

A Seizure Warrant was obtained from Pct. 4, Justice of the Peace Berry Graves by Sgt. Sprayberry and the horse was turned over to a Houston SPCA unit to be transported to their facility for medical attention. Despite its severe injuries, Deputy Bean said that he feels the animal will survive his injuries after proper treatment.

Francisco Castillo Cruz was arrested and charged with “Cruelty to Livestock Animal”, a State Jail Felony, and placed in the Liberty County jail. He will go before a Judge later for a setting of a bond.

According to Deputy Bean, a hearing will be held sometime on Tuesday, May 13th. to determine if the Pony should be returned to Cruz or if it will remain in the custody of the Houston SPCA.