Thursday evening Montgomery County Sheriff’s Office got a call for a sexual assault. A Precinct 2 Constable responded to the scene. It was reported the family had a male who claimed to be 19 but looked much older locked in the closet of their home. The unit arrived and learned that prior to Thursday the family was made aware their 14-year-old daughter was involved with this man who said he was 19. They had warned him to stay away and of legal problems, he could have if it continued. The male ignored those warnings Thursday. Deputies arrested Jamie Isabel Galo Hernandez, age 26, of 16847 Crockett Forest in Conroe for sexual assault of a child. He was booked into the Montgomery County Jail on a $20,000 bond.

0 0
Previous : DRIVER OF HIT AND RUN FATAL CRASH IN GRANGERLAND RETURNED TO MONTGOMERY COUNTY
Next : Bars must shut down at noon today, according to new order from Gov. Greg Abbott
Scott Engle 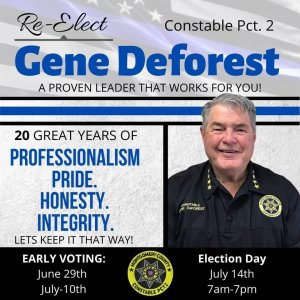