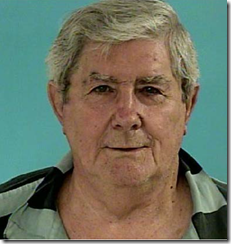 Thursday evening just before 8 p.m. several cyclists were riding down Lake Forest Drive in a single file when Sherman Ralph Clark, 74 passed them and a verbal altercation took place. According to one of the cyclists, Steve Schoger, Clark drove past them and along with a few cuss words told the cyclists to get off his street.

Clark then pulled in front of the cyclists and slowed down to about 15 mph. With the cyclists already peddling close to 25 mph, one of the riders went to pass Clark. That is when Clark began to drive to the left running the cyclist to the shoulder of the road. Another cyclist then came around Clarks right side in an attempt to go around. That is when Clark slammed his brakes on causing cyclist Rick Sauvageau to slam into the back of Clark’s truck.  Sauvageau fractured his wrist, dislocated his shoulder, and injured his left knee in the incident.

Clark then got out of the truck with a baseball bat and started another verbal altercation swinging the bat at the riders. The incident ended when Clark got back in his truck and drove off running over one of the cyclist’s $5,000 bicycles.

One of the cyclists using his phone captured video of part of the incident. When Clark was asked why he was holding the bat he replied to protect himself.

The Montgomery County Sheriff’s Office was dispatched to the scene and Clark was arrested for criminal mischief  $1,500 to $20,000 and for aggravated assault with a deadly weapon.

He was booked into the Montgomery County Jail on the criminal mischief charge and it is expected the aggravated assault with a deadly weapon charge may go to the Grand Jury.

Schoger said they have been riding the peaceful two-mile loop off Old Conroe Road in the Red Oak Estates Subdivision for almost 15 years with no problems except for one several years ago.

In that incident, almost 20 cyclists were riding the loop when Clark was backing out of his driveway. Schoger waited a short time and when the cyclists approached he backed out in front of them causing them to have to stop.

Schoger said the group participates in many cycling events throughout the year including the MS 150 and several others.

At 6 pm a bond was made for Clark who was going to be released sometime tonight from the Montgomery County Jail.