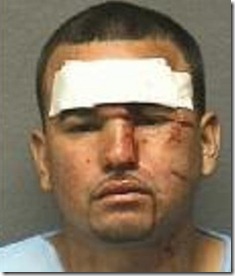 Johoan Rodriguez, 26, the man accused of driving while intoxicated when he struck and killed Houston Police Officer Kevin Will is now reported to be an illegal immigrant. In addition to that he has a MySpace page in which he shows total disrespect for the law. He states he went to Sam Houston High School from 2000 to 2004 and graduated.

Some of his comments include him hating people that cut in front of him on the road and slow down.

His photo online is him urinating on the Smith statue in front of Minute Maid Park.

He states, “did you know you can file off the serial number to a gun but only to the naked eye, the pigs can still know what it is, so if you plan on killing someone you best throw that Bit** in the ocean.

He remains in the Harris County Jail without bond.

LINK TO HIS MYSPACE –NOTE IS IS QUITE GRAPHIC