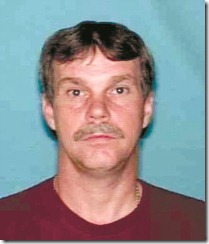 Family and friends of a missing Liberty County man remained in a torturous state of suspense on Thursday as they awaited the release of more information from law enforcement and tried to understand how 54-year-old Dennis Rogers could have gone for a walk a week before and seemingly vanished into thin air.

Rogers, who has short-term memory loss due to oxygen deprivation during a cardiac arrest four years ago, left his Plum Grove area home on foot on the afternoon of March 8, just as his family said he had done every day for a long time. However, on this day, something went wrong and he wound up in the woods. Rogers had been gone longer than usual and his adult daughter called him on his cell phone and learned he was lost in the woods.

The family then called the Liberty County Sheriff’s Office as they tried to convince Rogers to dial 911 so law enforcement could try and “ping” his phone, giving them his location. Due to their area of Liberty County, the 911 call went to Cleveland Police Department dispatchers and a family member had to go to the police station before the agency could initiate the process of getting geographical coordinates for Rogers’ phone.

By the time the phone was “pinged” and coordinates were provided, several people were already in place and ready to go and retrieve him from the woods. It sounded simple enough and everyone was optimistic they would have him home shortly, but it was not to be. When Rogers’ would-be rescuers reached where they expected to find him, Rogers was gone. Night had fallen and the area was deep inside thousands of acres of wilderness, some with thick underbrush and waterways running through it, some with roads that can be navigated in 4-wheel drive vehicles when dry, and some with trails that can only be followed on foot or ATV.

Family members and law enforcement communicated with Rogers until after 1 a.m. Friday when the connection was abruptly lost and it was assumed Rogers’ phone battery had died. Rescuers searched through 4 a.m. Friday morning as rain began to fall and temperatures dropped because of a cold front moving into the area.

The search was resumed at daybreak on Friday, with command centers set up and Captain Rex Evans of the Liberty County Sheriff’s Office heading up the operation. By then, word had spread by phone call, internet and other means, and strangers with 4-wheelers had come from as far away as Huntsville, Lufkin and Alvin to try and help. Volunteers responded from Liberty County, Montgomery County and Harris County. Montgomery County Precinct 4 Justice of the Peace James Metts is a friend of the Rogers family and was not only one of the first to go in searching for Rogers, he is among those who has put in the most hours. Montgomery County Search and Rescue responded provided assistance, as did members of the Montgomery County Precinct 4 Constable’s Office, including their Bloodhound, Oliver, a skilled tracker. Oliver picked up a scent and led his handler deep into the woods before seemingly losing the scent.

Friday night, Texas Department of Criminal Justice tracking dogs were deployed. Like Oliver, they followed a scent into the woods and then lost it in the same area.

The weather only worsened as time passed, with a torrential downpour flooding the area and making things even more difficult. As the search continued, more and more civilians, firefighters, and law enforcement arrived at the command centers set up at Cannon’s Feed on Hwy 321 and at Plum Grove City Hall on FM 1010. Some volunteered to search and contributed supplies for those braving the weather conditions.

At the same time, citizens familiar with the area searched on 4-wheelers. Initially, some began searching on foot and on horseback, but the rains mad the already rough terrain treacherous and dangerous for horses and humans. One fire truck even became stuck. The mud and something akin to quicksand was responsible for several twisted ankles, a flipped 4-wheeler (with no injuries), some cases of “trench foot” from too much exposure to water, and a horse that sank in the mud and nearly fell on its rider before he was able to jump off.

Adding to the difficulty, phone signals in the search area were weak or non-existent, quickly draining phone batteries so searchers risked being stuck or injured and unable to call for help. Even so, there was a tremendous offering of assistance and support from well beyond the immediate area where the Rogers family lives. Captain Evans estimates there were over 150 people searching at times during the weekend.

When Rogers left for his walk on Thursday, the weather was warm and dry and he was wearing a short-sleeve shirt. When the weather turned cold and wet, everyone became hopeful he took shelter in one of the reportedly hundreds of deer stands and camps scattered across the thousands of acres. Stand after stand was checked and Rogers was not found.

The rain did not stay away for long, and on Sunday, the search was again halted due to heavy rain and lightning in addition to a tornado warning. The intense rains turned ditches into rapid flowing bodies of water, along with Tarkington and Luce Bayous that run through the search area and had water moving in excess of 30 miles per hour according to officials. Along with the torrential rain came concern the rapid flow of water destroyed footprints or other evidence that might have helped locate Rogers.

By Tuesday, officials had asked that only firefighters, trained search and rescue K-9 volunteers and law enforcement go into the search area. The search was again underway when Captain Evans made an unexpected and upsetting announcement.

LCSO Detectives on 4-wheelers resumed searching the 42-square-mile area Thursday near CR3011 just outside Cleveland. They resumed the search based on information received from a conversation that allegedly took place at the No Tab Bar on FM 1485 in Harris County, between Huffman and New Caney and was later discussed on someone’s personal Facebook page.

Investigators remain tightlipped about the substance of the conversation because of the ongoing investigation. However, they did say some bar patrons gave others the impression they found Rogers while he lost, and had done something with him.

Those who know Dennis Rogers say he may have short term memory loss, but he is still a fighter, and they are not giving up hope he will return safely home.

Roger Tarrant said he has known Rogers his entire life and thinks of him as a “second Dad.” Tarrant recalls Rogers before his cardiac arrest, when he was a well-known racer, known to everyone as “River Rat.”

“He kind of ran the racetrack,” Tarrant said. “Everybody knew him, whether they were from Houston or Dallas- he had friends everywhere and wherever we went, they knew who River Rat was.”

Tarrant describes Rogers as an avid racer, who was shrewd when it came to business, but was someone who would always help out a friend in need. He remembers when Rogers’ heart stopped on that fateful day in Evadale four years ago. The lights dropped, he said, and Rogers’ engine remained revved up but did not move. When crews reached him, Rogers was already blue looking and leaned over the gearshift. A paramedic performed CPR on Rogers, who was then transported to the hospital where Tarrant says he stayed for weeks, fighting for his life.

At one point, Tarrant said, doctors gave Rogers’ wife Tammie little hope, telling her she needed to make some “tough” decisions about her husband. But Rogers’ wife and other loved ones knew him better than the doctors. They did not give up and Rogers pulled through.

Roger Tarrant’s mother, Leah, paints a similar picture of the racer everyone once called “River Rat.”

“Dennis is a fighter,” Leah Tarrant said. “He’s a little guy, but I’m telling you, he’s tough as nails.”

She also said Rogers “wouldn’t hurt a flea,” and she hopes if there has been an injustice against him, “punishment will be swift.” Lea Rogers further stated if Rogers could see the massive search operation, he would be happy to see how many friends he really has.

Updates on the Dennis Rogers case will be posted on our website at www.mccops.com as they are received.