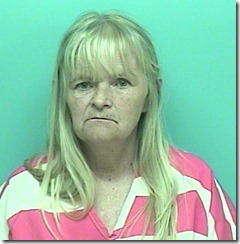 Montgomery County residents have something to be thankful for. That being the law enforcement of the county. Tuesday morning  just after midnight a pursuit turned into a officer involved shooting on Interstate 45 near Woodlands Parkway.  Montgomery County Sheriff’s Office detectives were called to the scene. With little sleep they continued  through the day working on the case.

Just as the field work was winding down another shooting was dispatched to them on Borough Park Drive. A woman had been shot multiple times, her 3-day-old child snatched from her arms. 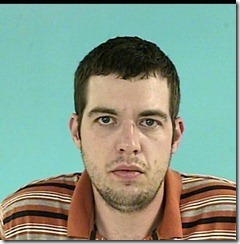 With no sleep the investigation immediately started and each detective told himself the child would be found. Relentlessly they combed area parking lots and followed any tip available. Knowing which security cameras were in the area because they had been viewed once several months ago when T.J. Murray vanished. Again they went looking for that little clue.

That driving through parking lots is how they found the suspects vehicle and in less than five hours had the baby safely secured.

Just because the baby was found their work was far from over. Their job now was to collect every bit of evidence available and they had almost finished the largest part of it late Wednesday night.

At 2:15 a.m a call came in on two victims that had been shot on Russell Drive in the New Caney area.  Without sleep or a shower within forty-five minutes they were on the scene and beginning the investigation.

When deputies arrived at the home on Russell Drive, they were forced to cut the lock on a 6 foot fence to enter the property. Once inside, they found a 59-year-old woman and her 65-year-old male companion had been shot during a robbery attempt.

The female victim, who was also the homeowner, was unconscious, with gunshot wounds to the head and shoulder. PHI Air Medical flew the woman to Memorial Hermann Hospital in Houston’s Texas Medical Center. The male victim sustained wounds to his neck and shoulder and was transported by ground ambulance to Memorial Hermann Hospital in The Woodlands.

Two to three males were reported to have left the scene possibly through a bedroom window, taking a safe with almost $50,000 worth of jewelry.

When the robbers arrived they began firing with a shotgun loaded with birdshot. They struck both of the victims in the upper torso and back but they got more than they bargained for when the female victim pulled a pistol of her own and began to fire. It is not known if anyone was hit by the pistol fire. When 911 was called gunshots could still be heard in the background.

This was the second time being attacked for this couple. On Friday, April 13, 2012 someone made entry to the home, maced them and stole some money. This forced the female to keep a loaded pistol handy. She was planning on moving to a better neighborhood in east Harris County this weekend.

The female homeowner who lost her husband to cancer in January was flown to Memorial Hermann Hospital in Houston by PHI Air Medical. Early this Friday morning she remains critical but stable.

Her male friend who has been staying with her and is from Splendora was taken by MCHD to Hermann Hospital in the Woodlands. Friday morning he is listed as serious but stable.

Throughout the day detectives developed leads. They got a tip on an HHR and put an attempt to locate out on it. Early Thursday afternoon another tip came in that the vehicle was at a Motel  on Eastway Drive in Humble.

Montgomery County Deputies swarmed the Motel, Humble Police were called in to assist.

They then arrested Adrian Nathaniel Comstock, 29 after it was determined he had open warrants. They also detained the owner of the vehicle Patricia Lynn Hickman, 56, of Spring.

At 2 a.m. this morning, just less than 24-hours after the robbery and shooting arrest warrants were signed for Hickman and Comstock. They have been charged with aggravated robbery. Additional charges are possible. The vehicle was taken to the Montgomery County Crime Lab for processing.

Both suspects are now waiting to be booked into the Montgomery County Jail.

Detectives are now hoping for a few quiet days to catch up on sleep.

They do expect additional arrests in the case. 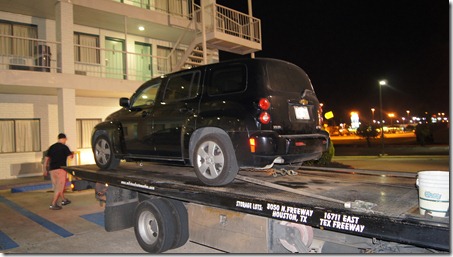