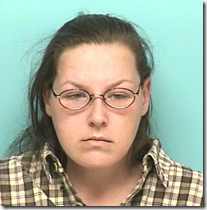 Sherri Lorene Holloway, age 30, of the 12300 block of White River in Tomball remains in critical condition at Hermann Hospital in Houston, This after she was involved in the fatal accident Thursday on SH 105 near Jay Hawker Creek.

Holloway had been stopped for DWI on May 13, 2010. A blood sample was submitted to the DPS lab and was returned to officials with the results. The toxicology report showed that her blood showed to have codeine, soma and xanax in her system at the time of her stop.

A warrant was issued  and she was arrested on January 28, 2010 when she turned herself in at the Montgomery County Jail. She bonded out on a $1000 bond using AZ Bail Bonds. She is due in Judge Stewarts court again on March 30, 2011. It was unknown if today’s crash was alcohol related.