April Flanagan pleaded guilty to violent crime in aid of racketeering activity, to-wit, conspiracy to murder David Mitchamore, in late November  before U.S. District Judge Marcia Crone.  Flanagan also pleaded guilty to acting as an accessory after the fact in the murder of Christy Rochelle Brown. In exchange for her assisting in the investigation the murder charge on her was dropped in which she was facing the death penalty Today, she was sentenced to 180 months in federal prison by U.S. District Judge Marcia Crone.

She plead guilty in November and in return for her cooperation in assisting in the case the death penalty was taken off the table.

According to information presented in court, Flanagan had close ties to the Aryan Brotherhood of Texas, a race-based state-wide organization which operates inside and outside of state and federal prisons that are located throughout the state of Texas and the United States.  The ABT enforces its rules and promotes discipline among its members, prospects and associates through murder, attempted murder, conspiracy to murder, assault, robbery and threats against those who violate the rules or pose a threat to the enterprise.  Members, as well as  ABT associates and prospects, are required to follow, without question, the orders of higher-ranking members.  These so-called “direct orders” typically task the ABT member or associate to “discipline” the offending individual with some sort of physical force.

U.S. Attorney Bales expressed his appreciation for the hard work performed by so many officers and agents.  He also stated, "Today’s sentencing is a bittersweet moment.  It marks another significant step in achieving justice for the families of David Mitchamore and Christy Brown.  It also signals that we continue to make good on our promise to do everything that is legally possible to dismantle the Aryan Brotherhood of Texas, a vicious criminal organization."  Nevertheless, we are mindful that a prosecution alone cannot erase the profound sense of loss felt by the families of the victims. 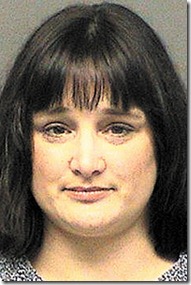 On February 17, Carrie Wood, 38, of New Caney plead guilty in  a Beaumont federal court after she was charged with the aid of racketeering after she and Terry Stalsby and April Flanagan cleaned up after a double murder and also provided a get away car and secured the murder weapon for Brent Stalsby a member of the Aryan Brotherhood.